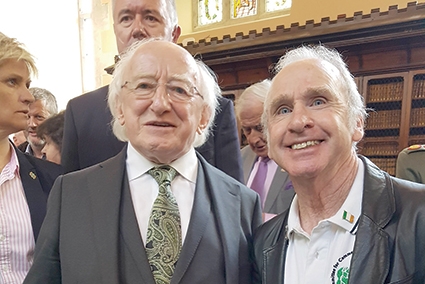 Dedication and decade-long campaign pays off for family

A FAMILY’S determination and decade-long campaign to secure a fixed date on the national calendar for the Famine Memorial Day has finally paid off, with the Government approving the third Sunday of May each year for the commemoration.

In 2004, Raheen resident Michael Blanch founded the Committee of the Commemoration of Irish Famine Victims (CCIFV) – the group responsible for the introduction of a national day of remembrance in 2008 by then Taoiseach, Brian Cowen.

Since a national day of remembrance was introduced in 2008, CCIFV has been lobbying Government for a fixed date on the national calendar for the National Famine Memorial Day, which remembers the victims and emigrants of An Gorta Mor.

Despite numerous knock backs, CCIFV continued on its mission to secure a fixed date, garnering political and public support along the way.

And, after a decade of campaigning, the committee has finally had the news it’s worked so hard for.

Speaking with The Echo, Michael said: “A long campaign comes to an end, after the CCIFV Tallaght community group lifts the State’s amnesia and denial of An Gorta Mor, after 173 years.

“Finally the victims of An Gorta Mor get the honour and respect they rightly deserve.

“This is a historic day for Ireland and for the Irish people at home and abroad.”

According to the statement: “The arrangements for the holding of a State commemoration on this day or the preceding Saturday to be decided each year following consultation with the relevant local authority and host community.

“The decision to designate the third Sunday of May for this commemoration takes account of the other elements of the State ceremonial calendar including Arbour Hill and Daniel O’Connell commemorations held in May.”

Alongside campaigning for a fixed date, CCIFV has also engaged in numerous, nationwide projects that honour, remember and tell the story of those who lost their lives or left Ireland during An Gorta Mor.

One project involves placing markers on 163 famine workhouse sites, to remember the last resting place of the victims of the Famine while another is the Lumper Schools Project, which was launched in Scoil Santain in Tallaght.

The Lumper Schools Project sees school children plant Lumper spuds which, extinct after the Famine, are being harvested again and, according to Michael, are a “living artefact history teacher” for young people learning about the Famine.