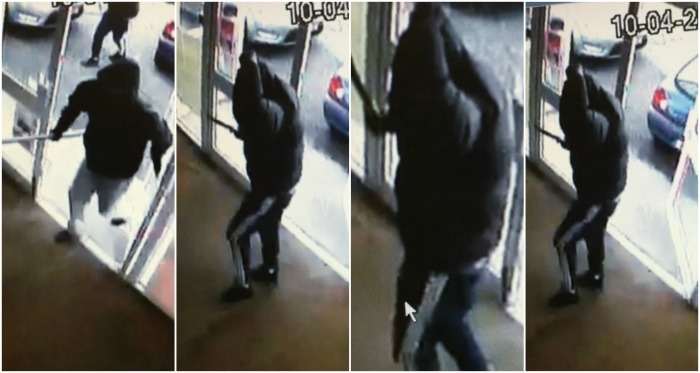 Demand made for more strict laws against robbers who carry knives

CALLS have been made for stricter laws in relation to robbers who carry knives, following a terrifying raid on Tallaght Adventure World last Sunday.

As reported on The Echo’s website, and widely across national media, a children’s play centre was targeted by raiders on Sunday, April 10, at 5.55pm – when staff, parents and 12 children were in the Tallaght Adventure World premises.

Two men dressed in black, with their faces covered, and carrying a steel pole and a large knife, jumped out of a car which had reversed up to the doors of the play centre. The car, which was driven by a third person, was later found burnt out in Killinarden.

Centre manager and father-of-three Robbie Doyle received hand injuries from a knife during the raid and underwent an operation in St James’s Hospital.

Since the raid, the community of Tallaght has expressed outrage over the incident and shown their support for owner. Independent Tallaght councillor, Dermot Richardson branded the raid on the children’s play centre as a “new low”.

A man in his late twenties was arrested on Monday in relation to the raid and detained at Tallaght Garda Station.

However, he has since been released pending a file to the Director of Public Prosecutions (DPP).

Speaking with The Echo, Cllr Richardson said: “Thankfully Robbie is home now and there is no serious muscle damage done to his hand.

“The way these raiders dressed and the size of the knife they carried was a horrendous attack on children while they played.

“It really is a new low coming into a place where children are playing and acting in this extremely violent way.

“Hopefully Gardaí will get a conviction and that the judge deals with it appropriately.

“I do believe we need stricter laws for people carrying knives, as there is a serious intent to threaten and cause injury.

“This is not just about Tallaght Adventure World, there have been attacks on a large number of small businesses in Tallaght – which is not a reflection on the work done by gardaí but on resources.”

Cllr Richardson said that he will also be seeking a meeting with Tallaght Superintendent Peter Duff and Chief Superintendent Orla McPartlin over forensic resources for Tallaght.

Cllr Richardson claimed that forensic resources were not available on the evening of the raid – which resulted in officers staying in Tallaght Adventure World overnight to preserve the scene until the morning.

“The resources need to be available, especially in an area as big as Tallaght”, Cllr Richardson said.
“Information could have been gathered on Sunday and an arrest made that evening, no resources just prolongs the investigation and gives criminals an advantage.”

A senior Garda source told The Echo that no more arrests have been made in relation to the raid on Tallaght Adventure World.

The source added: “Investigations are ongoing and anybody with information is encouraged to contact the station in confidence.

“In relation to forensic teams, sometimes this is due to resources – the team could be working at another crime scene.

“However, sometimes the lack of light is a factor in forensics being carried out the morning after a crime.

“Sometimes it is resources, but sometimes a deliberate decision is made – there’s actually a lot of factors that impact on when forensics are carried out.”

Tallaght Adventure World is operating as normal and Cllr Richardson expressed his gratitude to the Tallaght community for its support over the past few days.