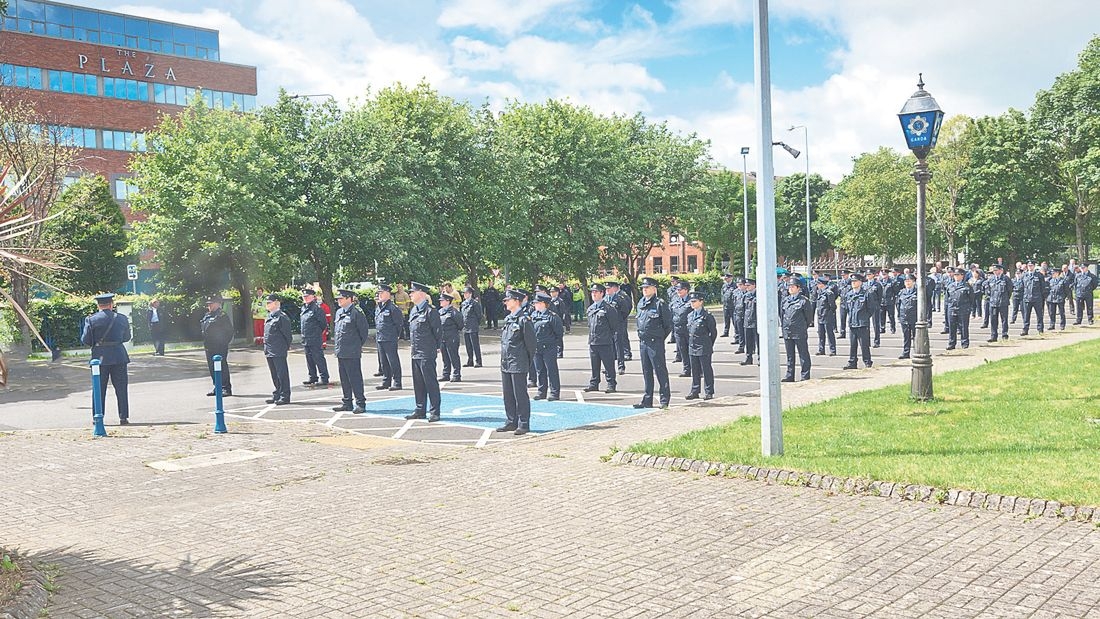 Detective Horkan was ‘one of nature’s gentlemen’

ON SUNDAY, June 21, local Garda Stations stood still in a silent tribute to Detective Garda Colm Horkan, who lost his life while on duty in Castlerea, County Roscommon.

A minute’s silence was observed before Detective Garda Horkan’s funeral in his hometown of Charlestown, Mayo, last Sunday – a silent tribute was observed at the same time by Garda stations around the country.

President Michael D Higgins sounded the Peace Bell at Áras an Uachtaráin to signal the start and the end of the minute’s silence, uniting the country in remembrance and tribute to the 49-year-old officer.

At his State funeral, he was remembered as “one of nature’s gentlemen”, and a person who was “deeply loved”.

Tallaght Garda Station was among a number of local stations in South Dublin to observe a minute’s silence for Detective Garda.

More than 150 people gathered for the service, which was led by officers at Tallaght and supported by retired gardai, local emergency services and members of the public.

The national flag raised at half mast at Tallaght Garda Station

Minister Katherine Zappone also attended the service, which included a lament played by a piper from the ambulance service.

Speaking with The Echo, Tallaght District Superintendent Ian Lackey thanked those who gathered and also issued thanks to those who visited the station in recent days to sign the book of condolence for Detective Garda Horkan

“I think what happened to Detective Garda  Horkan refocuses everybody on the fact that this can happened anytime, anywhere”, Supt Lackey said.

“We have lost two members in Tallaght, and it has a lasting impact on the community.

“We have a service annually to mark the passing of Andy and Pat, it means a lot to their family members that we remember them.”

He added: “We would like to thank everybody who was present with us in support over recent days.

“We may not have all been in Castlerea but we were there in spirit.”