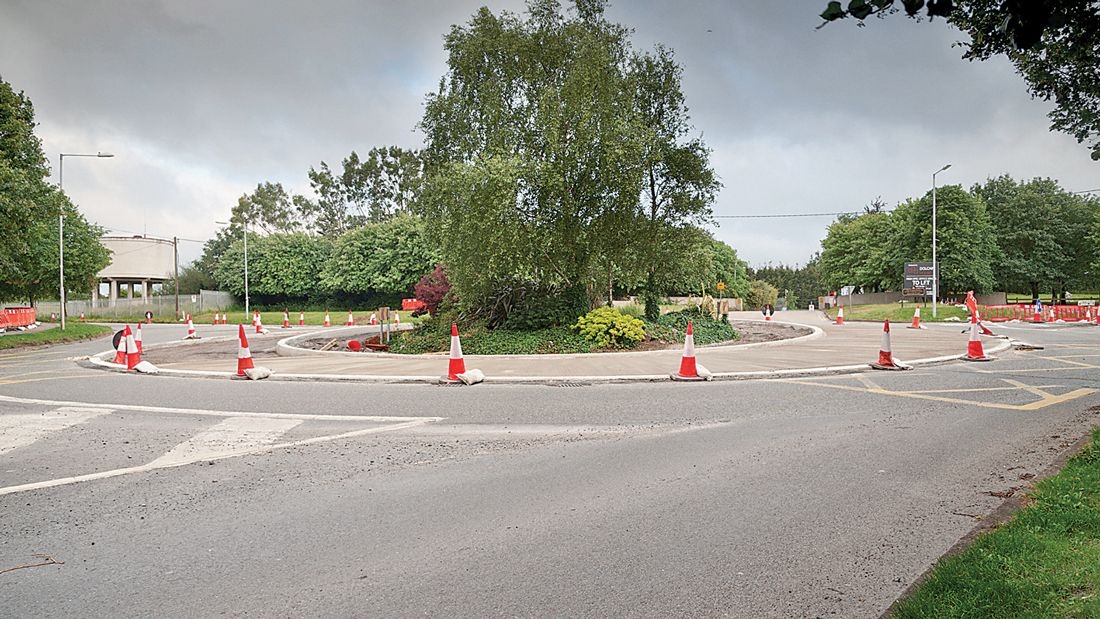 Major upset at loss of traffic lane at roundabout

THE loss of a traffic lane at a busy junction in Clondalkin has upset residents who fear it will increase traffic congestion.

Works for the Monastery Road Improvement Scheme Phase 4 by South Dublin County Council are taking place to “provide safe walking and cycling facilities” between Clondalkin Village and the Luas line.

The roundabout in Woodford

While residents have no issue with this aspect, they say reducing traffic lanes at Woodford Hill roundabout from two lanes to one, will create longer delays.

Rachel Somers, is “dreading” trying to get out of her estate on Woodford Drive when schools reopen.

“My son is in school in Palmerstown. We have to drive him. Traffic will be awful, especially with the new apartments on Monastery Road and the new nursing home beside the library,” she said.

“I have a business (counselling service) in the village so thankfully I can walk there, but it will make the village harder for my clients to access.”

Another Woodford resident Mairéad Merrigan believes the reduction of lanes at the roundabout will be a “nightmare” at rush hour.

“It restricts access to the village and will increase congestion when there is already issues with traffic, often stretching past the Dutch shops. I witnessed a bus trying to navigate the junction this morning (Tuesday) coming from Monastery Road and it was barely able to navigate the roundabout.”

A Woodford man said the right hand lane on Woodford Hill roundabout was used by people to drive in the direction of Clondalkin Village.

“Now we will all be stuck way down the road and waiting for other people going towards the M50. Generally, after 7.30am traffic is heavy here. I think they needed a street light at the junction because it is very dark at night, and I have often had to jam on the brakes. It is not a natural Zebra crossing.”

While residents say they were unaware of the reduction of a traffic lane in the plans, the council said drawings that went on display during the public consultation “clearly show one lane on all approaches and exits to the roundabout.”

A council spokesperson said: “The queuing that occurs at this roundabout is mostly as a result of traffic issues at the IBIS roundabout. Changing the two lanes to one lane and reconfiguring this roundabout will not have a major impact on vehicular traffic at this location but will have significant impact on the safety of vulnerable road users like pedestrians, cyclists and wheel chair users as a signalised pedestrian crossing will be installed on the Woodford Hill arm of the roundabout.

“The objective of the scheme is to provide safe walking and cycling facilities between Clondalkin Village and surrounding estates to the Red Cow Luas station so that people in the locality will use sustainable means of transport to access facilities in the area such as schools and shops.”

Clondalkin Cllr Eoin Ó Broin (Ind) spoke to one of the design engineers during the week and was told another reason for the change is to make it safer for pedestrians to cross the road.

“The lack of investment in footpaths, cycle lanes and public transport in this country since the foundation of the State has been chronic, said Cllr Ó Broin.

“This scheme is about addressing this imbalance but the National Transport Authority need to back it up with information campaigns and a programme for school busses, be they traditional four-wheel busses or the newer idea of walking/cycling busses.”

The Echo understands engineers will meet a delegation of residents next week at the roundabout to discuss the matter.