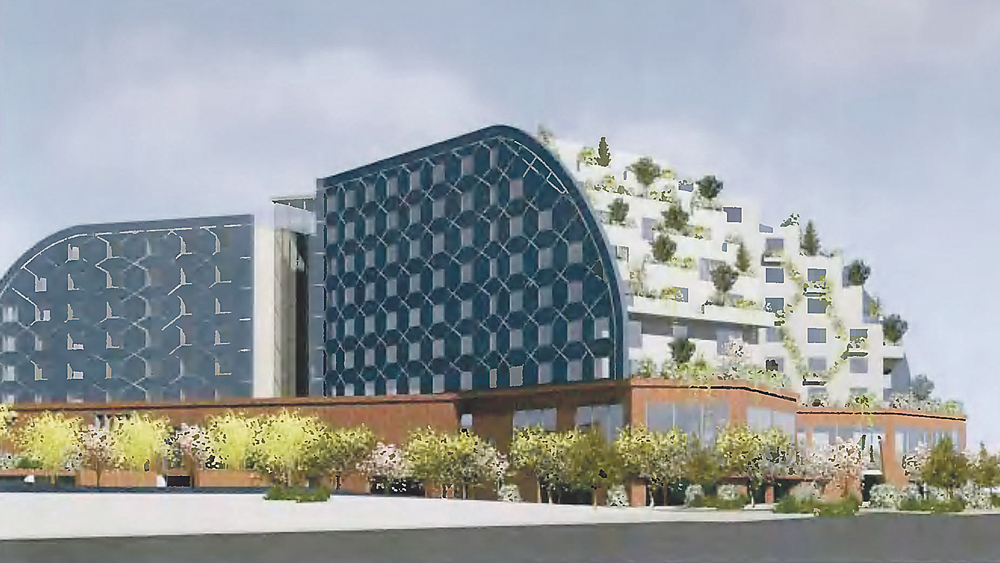 An artist’s impression of the Newlands Park Hotel

THE DEVELOPER of Newlands Park Hotel has expressed “serious concerns” about the way its planning application was dealt with by South Dublin County Council.

After it conducted a “significant redesign” of the proposed 242-bedroom four-star hotel at the request of the council, the applicant believes the planning authority “did not deal correctly with the information supplied to it”.

In the appeal, the applicant stated that “the planning authority requested comprehensive further information, which was addressed in detail”.

The initial application seeking permission to construct a hotel on lands just off the Naas Road was lodged last October.

In December, South Dublin County Council (SDCC) requested that the building height, which it described as a “monolithic structure”, be reduced to five storeys in accordance with the Development Plan.

Another option it gave was to provide a “significantly amended proposal for a tall building” including a shadow assessment, ecological assessments and assessment of microclimatic effects among other things.

The corresponding information was provided to the council in June, which included a redesign to reduce its height by three floors (nine metres) to bring to a height in keeping with the surrounding environment.

In July, council reiterated that it took into account the “monolithic and over-dominant design of the structure” when making its decision to refuse permission.

In the three listed reasons for refusal, two corresponded with the height of the building and the other was around the internal road layout linking Knockameenagh Road with he N7 (Naas Road) slip road.

In a revised plan, the Knockameenagh Road was to be widened to six metres for a distance of 270m before the turn into the hotel grounds.

However, the council stated that a widened vehicular access was “not demonstrated as deliverable”.

This would be contrary to transport infrastructure guidelines and “if granted would have a negative impact on the N7 at this location”.

In the appeal filed on August 13, the applicant stated that the planning authority “misinterpreted the information and dismissed the information” supplied to it “without adequate explanation in composing the reasons for refusal”.

Challenging one of the council’s reasons for refusal around building height, Colm Neville Construction UC said that “a building which is to be more than two storeys in height needs a separation distance of 35 metres or greater from existing housing.”

It believes that the application shows the hotel building is 112 metres away from the nearest house at St Brigid’s Cottages.

The appeal, prepared by Simon Clear and Associates Planning and Development Consultants on behalf of the applicant, is 34 pages in length.

In conclusion, the applicant stated that “there is no possibility of creating a rat-run” through the internal road layout of the hotel “without driving in the wrong direction on public roads”.

It believes that the council “failed to properly consider the information provided about existing permission for taller buildings in the locality”.

It was pointed out that there is a cluster of taller buildings “on the highest crest” in the locality, which is visible along the M50, and believe this was “ignored in the the council assessment”.

“The proposed hotel is an appropriate, public-access building to locate alongside a major transport corridor,” the appeal reads.

Simon Clear signed off the appeal that stated the reasons for refusal by the planning authority “cannot reasonably be sustained” and requested that permission be granted by ABP with appropriate conditions.