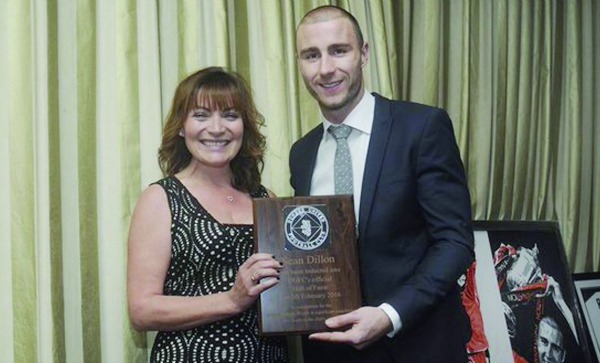 CLONDALKIN’S Seán Dillon has become one of the latest inductees into the Dundee United FC Hall of Fame.

Playing with the Scottish Premier side since 2007, the 32-year-old defender has become the most featured non-Scot in the history of the club, making 314 appearances and scoring seven times.

“I was really honoured, but I don’t look at myself like that” Dillon told The Echo.

“I don’t see myself as being up there with those who have been inducted before me, the likes of Paul Hegarty and Maurice Malpas, but it was a huge honour and I was so grateful for it.

“When I look at how many games I’ve played for the club and the fact that I’m the first player to get this award while still playing, it is very special.

“I had my family over for the ceremony and I was just delighted seeing how happy they were for me. It was a really nice touch. I’m nine years with the club and I’m proud of my time here.

“It sometimes works out that you stay at a club for a long time and when you’re at a club for so long you get to know so many people.

“It’s a great club and I think that I’ve been very lucky with the timing of contracts. They club has always wanted to keep me and I’ve always to stay.

“I feel there a few more years left I me and I’ll certainly be doing everything I can to stay on” he stressed.

Penning a new contract last summer that will keep him there until the end of the 2016/17 season, Dillon has helped the Tangerines to a number of great cup runs.

Indeed he picked up a Scottish Cup winners medal in 2010 two years after the club had reached the League Cup decider.

They made the Scottish Cup Final again in 2014 before losing out to Celtic in the League Cup final the following season.

This season, however, the team is struggling to haul themselves off the bottom of the Scottish Premier table.

Yet while 11 points currently separate them from second-from-bottom Kilmarnock, they do have two games in hand and Dillon insists they will keep on fighting right to the end of the season saying “that’s what it’s all about for us. We’re desperate to turn it around and we can.”