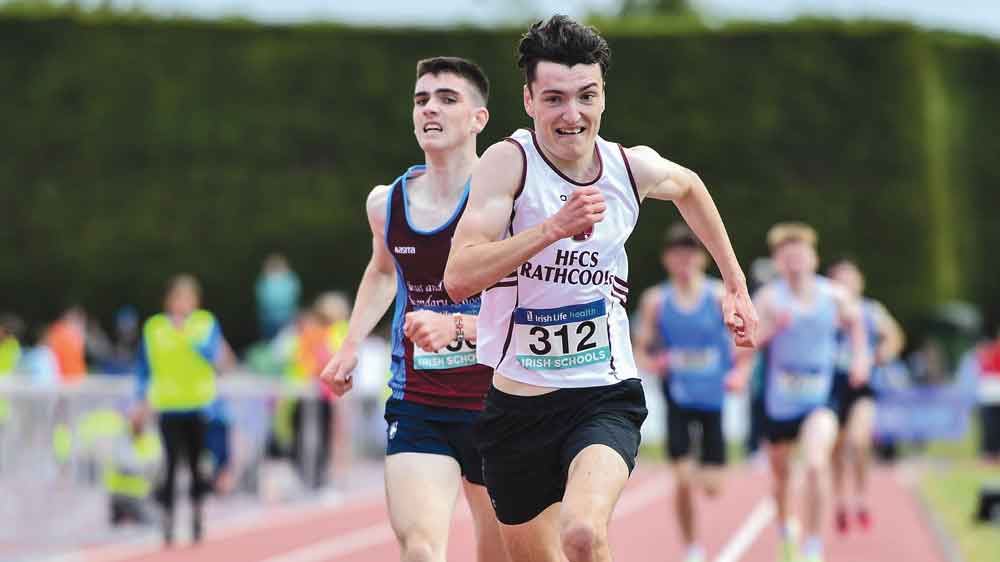 CORMAC Dixon is one of several Tallaght AC athletes who have been lighting up the domestic athletics circuit in recent weeks.

Only last Saturday he raced home to victory in the All-Ireland Schools Intermediate Championships 3000m race in Tullamore, staving off the strong challenge of Darragh Mulrooney.

That win, followed hot the heels of several others for the Holy Family CS Rathcoole runner who had twice clocked a European Youth Olympic standard for the 3000m when he registered a time of 8:49.11 on home turf in Tallaght, before significantly improving on that with a 8:42.38 on his way to victory in the Dublin Under 17 Championships.

Dixon also captured silver in the Dublin 800m Championships with a new PB of 2:01.1 and will be chasing the 1500m title in Santry next weekend.

Meanwhile clubmate, Jack Kelly has secured the European Under 18 Championship standard for the 800m after he recently won the Dublin title with a time of 1:57.8.

And he will be seeking to consolidate his position in the coming weeks before the selectors meet after June 18, as will Sean Agiboboh who recorded a time of 10:98 for the 100m, which unfortunately exceeded the allowable wind time at a recent Dublin Graded meet.

Still, the All-Ireland Schools Intermediate bronze medallist will have further opportunities to impress in the coming weeks.

Other Tallaght athletes in top form include Hazel Jordan, who won bronze in the Under 17 800m Dublin Championships.

That came on the back of a very good run in the Dublin Graded meet where she recorded a new personal best time of 2:16.9 before clocking of 2:20.17 en route to a pillar-to-post victory in the Grade B 800m contest in Tallaght.

Shasta O’Brien emerged fourth from the Dublin Under 18 Steeplechase Championships in 6:52.2 and Moss Grace carded a new PB of 2:15.8 when finishing seventh in the Under 18 800m.

Many more Tallaght athletes will be looking to make the podium and secure National qualification when they contest events at Day Two, Three and Four of the Dublin Juvenile Championships in Santry next weekend.