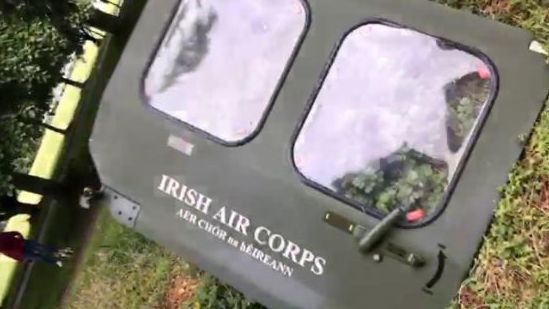 Door falls off helicopter and lands in park

A FULL investigation is to be carried out after an Irish Air Corps door fell off an helicopter and landed in Moyle Park just before 6pm.

In a statement released this evening by the Air Corps:  “At approximately 5.52pm this evening, Thursday 21st May, the rear door of an Emergency Aeromedical Service helicopter detached while returning to Casement Aerodrome and landed in Moyle Park, Clondalkin.

“Nobody on the ground, or in the air, was injured in the incident.

The crew of the AW139 helicopter had successfully completed a life saving mission to a Dublin hospital and were returning to Baldonnel for fuel.

“The area in which the door fell was secured by Defence Forces personnel and An Garda Siochana within five minutes of the incident and an investigation team were on scene within thirty minutes.

Once the area has been analysed the door will be removed and transported to Baldonnel.

“The EAS service will recommence tomorrow, as normal, with a replacement aircraft and crew. A full investigation will be conducted into the cause of this incident”