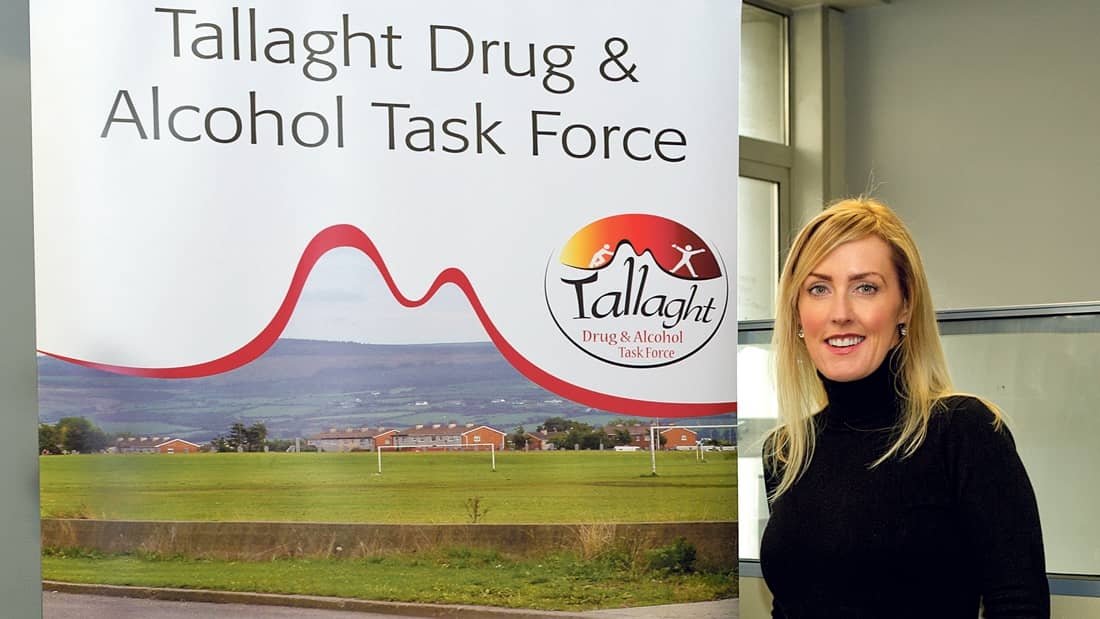 THERE “may be a mechanism to review current services and funding allocations” for the Tallaght Drug and Alcohol Task Force in the mid-term review of the National Drugs Strategy, according to the HSE.

As previously reported in The Echo, the Tallaght Drug and Alcohol Task Force has repeatedly called for increased funding from the government as they grapple with the rise in crack cocaine addiction in the area.

Grace Hill, co-ordinator of the Tallaght Drug and Alcohol Task Force welcomes what the HSE has said

Fianna Fáil councillor for Tallaght Central, Charlie O’Connor, asked the HSE at a recent meeting of the Mid-Leinster Regional Health Forum if there was “an update on proposals to further support and assist” the Tallaght Drug and Alcohol Task Force this year.

In response, the HSE stated: “The Addiction Services on a local level will continue to fully support and assist the Tallaght Local Drug and Alcohol Task Force, and the funded projects in 2021.

“The Addiction Services have an active representation on the TLDATF and also its Executive Management committee.

“It has been indicated by the DPU [Drugs Policy and Social Inclusion Unit] in the Department of Health, that the mid-term review of the National Drug Strategy may be a mechanism to review current services and funding allocations.”

Grace Hill, coordinator of the Tallaght Drug and Alcohol Task Force, told The Echo: “I really welcome what the HSE has said.

“We fed into the National Drug Strategy through a collective piece with all of the other task forces.

“There isn’t a plan for them to meet the task forces individually, so I sent in some further information for them from a Tallaght perspective.

“We’re looking forward to learning how we can feed into the strategy [individually] as it’s only been done collectively.”

The issue of drug dealing, and task force funding, was also a debate topic in the Oireachtas earlier this month, where a number of local TDs from Dublin South-West expressed their concerns.

Green Party TD Francis Noel Duffy said: “The task forces are seriously starved of funding”, and added that gardai need to “get tough” on drug dealing.

RISE TD Paul Murphy said: “Abuse and addiction are deeply rooted societal issues connected to alienation, deprivation and so on, but one important part of the solution is the heroic work done by drug projects in our communities.

“They have suffered cuts and are scrambling around for funding, unable to do what they want to do. They need assistance.”

Fianna Fáil TD John Lahart said that every department “needs to come to the table, to meet the drugs task forces and to make sure that the people who traditionally sat around this table but who have fallen away over the years get back to it.”

Sinn Féin TD Seán Crowe bemoaned the prevalence of drug dealing in the community at local shops and post offices, and added: “My constituents who are in recovery and rehabilitation should not have to pass drug dealers outside the very services they attend for counselling and addiction supports.”

Minister of State for Law Reform, James Browne TD, said that the Garda National Drugs and Organised Crime Bureau “is having continued and significant success in disrupting drug trafficking and the supply of illicit drugs”.

“These will effectively address what Deputy Lahart is talking about, namely, getting those people around the table.

“The community safety partnerships will set up a system somewhat similar to what local community development committees, LCDCs, work on by getting everybody around the table and working together to try to tackle the issues that are there.”

He also said that he will bring the Youth Justice Strategy, which centres on children and young people who come into contact with the criminal justice system, “to the Cabinet table in the coming weeks”.

NEWER POSTNature on our doorsteps: Crows’ nests – or not?
OLDER POSTRusty’s personality was so big he was the noise of the house