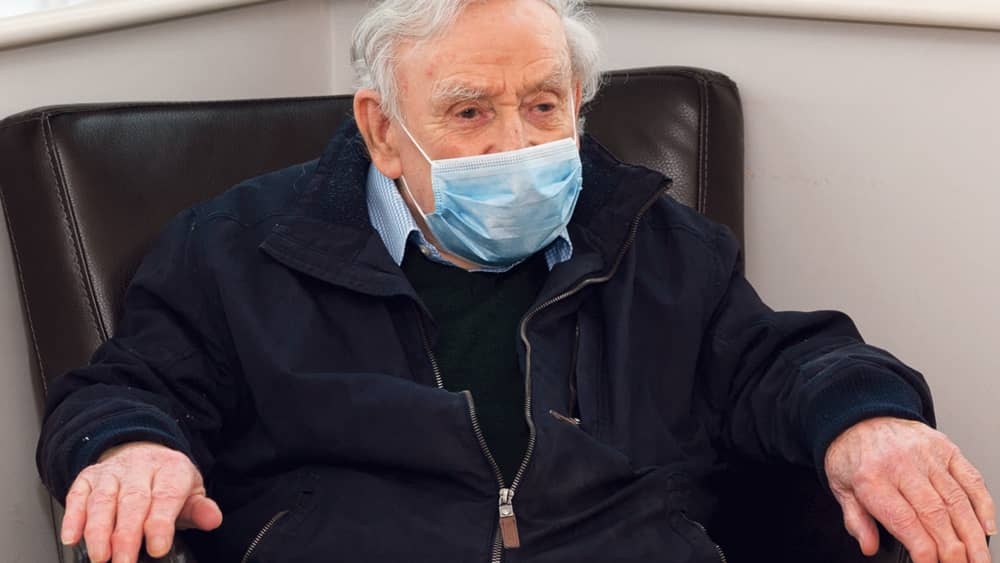 Dublin goalkeeper Gerry (92) was number one to get vaccine

A FORMER Dublin GAA footballer, who proudly wore a number one jersey during his tenure, was the first person over 85 to receive the Covid-19 vaccine in the Glenview Clinic.

Gerry O’Toole, 92, who is originally from Crumlin but has lived in Tallaght Village for the past 64 years, received the Pfizer-BioNTech vaccine in the clinic on Saturday.

Gerry O’Toole after getting the vaccine

After spending the majority of the past year in his house, and not meeting up with anyone outside, Gerry was delighted when he was offered the vaccine and was heartened by the clinic’s decision to make him their first patient over 85 to receive the vaccine.

Mary Farrelly from the Glenview Clinic said: “Gerry used to play for Dublin in 1950, and his jersey was number one, so we said he’d be our number one in the clinic on Saturday.”

Gerry was the goalkeeper for the Dublin team from 1950 to 1955, and for the first two-and-half-years his jersey was number one, and for the remainder of his time after that he was a substitute player and wore jersey 16.

“I was an outcast on the Dublin team,” Gerry told The Echo. “I was the only southsider, everybody else on the team was from the northside.

“But it was unbelievable, it was a different time. I suffered three broken ribs once when I was playing a match, it was all blood and tears back then.

“But it was great craic, I enjoyed every bit of it. I actually played on seven different soccer teams too – I had to keep switching around, because there was a ban and if the GAA found out then you’d be suspended for life.

“If that had happened, I would’ve been heartbroken.”

Gerry has passed on the sporting tradition through generations, as his sons were actively involved in GAA and his grandchildren play for Thomas Davis – where Gerry was the chairman of the juvenile section until 1990 – and Ballyboden St Enda’s.

Explaining why his passion for Gaelic football has endured over the years, Gerry said: “Soccer sends me asleep – there’s more action in a Gaelic match in five minutes than there is in a 90-minute soccer match.

“And rugby? The ball’s the wrong shape!”

Gerry has been having in-depth discussions with his local shopkeeper about GAA since the lockdown began, and has been largely filling his time by walking around his garden to get some fresh air. His son Enda has been going shopping for him.

“I have two bad knees from my footballing days, so my walking is very limited,” explained Gerry. “But I do walk around the garden, and the only time I leave the house is to go down to the local shop or the doctor.”

Gerry was contacted by his local doctor, Dr Patrick O’Connor from the Glenview Clinic, last week, who offered him an appointment to get the vaccine that weekend.

“I was a bit apprehensive about getting it,” said Gerry, “but it was nothing. It felt the same as getting the flu vaccine. They made a big fuss of me. I was spoiled rotten!

“I’m feeling a bit more confident now, I was absolutely delighted to get it. I’m looking forward to getting my second dose next month.”

Dr O’Connor said all of the clinic’s patients who were offered the vaccine accepted it, and a total of 54 vaccines were administered on Saturday.

“The feeling was very positive, it felt like there was a carnival atmosphere,” he said. “It was great.

“Like a lot of other people, we’ve had a tough year, so there was a feel-good factor on Saturday because we felt, for the first time, that there was light at the end of the tunnel.”