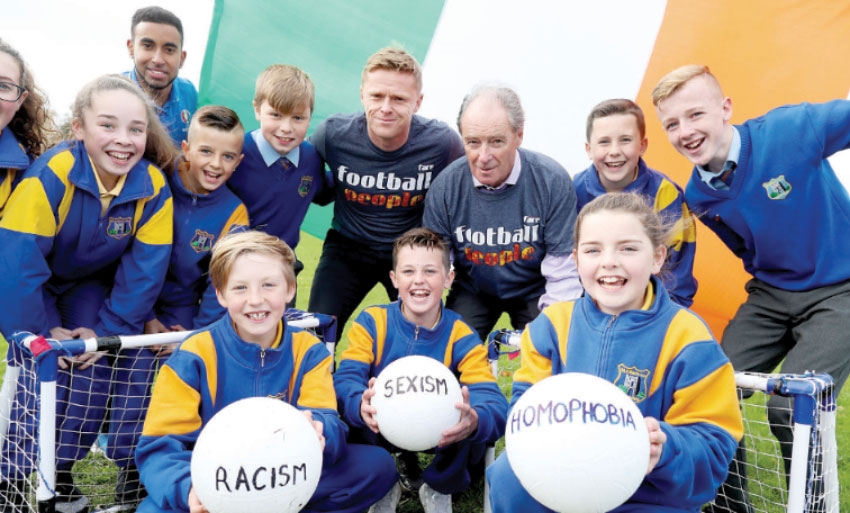 Duff and Kerr in Kilian’s to promote FARE Action

FARE Action Weeks take place in October and are co-ordinated by SARI. The aim of the initiative is to bring together professional and amateur footballers, football fans and young people on pitches and playgrounds up and down Ireland to participate in workshops, games and training that challenge discrimination and promote the social inclusion of marginalised groups.

For the month of October, as part of the initiative, SARI is delivering free anti-discrimination football training workshops in primary schools across the country.

The anti-discrimination workshops bring together pupils, on the pitch or playground to play football, develop football skills and, in the process, consider and challenge concepts such as discrimination and racism as well as learn about other cultures in Irish society.

Speaking at the workshop in St Kilian’s, Duff said “I am delighted to be here in St Kilian’s to see how much fun can be had while learning some incredibly important life skills.

“Looking around it is clear how sport is uniquely placed to unite people, to bring communities and countries together.

“There can be no room for discrimination, on the pitch, or playground or within our workplaces or communities.

“SARI’s work through sports is changing how young people can understand the world and each other and it’s great to be a part of it” he added.

SARI Director and former Ireland Manager Brian Kerr said “Damien Duff remains an inspiration to people both on and off the pitch because he worked hard and played fair.

“The anti-discrimination workshops are very popular because young people can see for themselves how the kindest and fairest and most straightforward thing to do is to treat people with respect” he added.

As part of the FARE weeks, SARI has organised Airtricity League clubs to host matches against teams from refugee communities, Direct Provision Centres and other at-risk communities.

Schools and groups can log onto www.sari.ie to find out how they can participate.