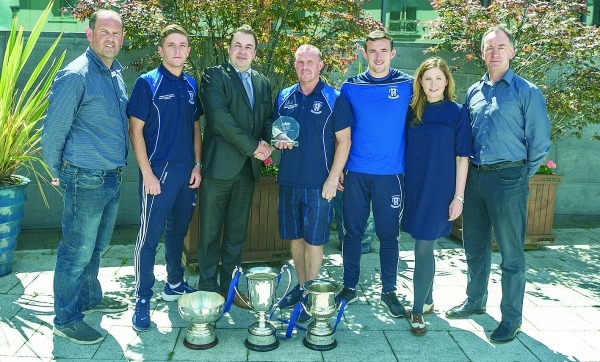 Echo Sports Team of the Month May 2017 – Collinstown FC

IT HAS proven a tremendous season for Collinstown FC after they completed a treble in their first term in the Leinster Senior League.

Kevin Carroll’s side topped the Major One Sunday table and landed the Leinster Junior Cup before then capturing the O’Neill’s Polikoff Cup in dramatic fashion.

Indeed they appeared to be heading for defeat in the final of the latter against Willow Park, but a last-minute equaliser by Dylan McKeever sent the game to extra time during which Daniel Matthews fired home the winning goal.

It was Willow Park who had proven the Clondalkin side’s biggest rivals in the race for the LSL Major One Sunday title, but they were five points off the pace by season’s end.

Following that feat, Collinstown made it two Leinster Junior Cup titles in three seasons, beating Sheriff YC in the final for the second time.

While they edged out the northsiders 1-0 in the 2015 decider, this year’s final proved even closer as it went to penalties after the two teams finished deadlocked at two goals apiece.

It was substitute goalkeeper Ross Costigan who rose to the occasion, saving from John Rock before John Lester sent his spot-kick over the bar to hand Collinstown a famous win.