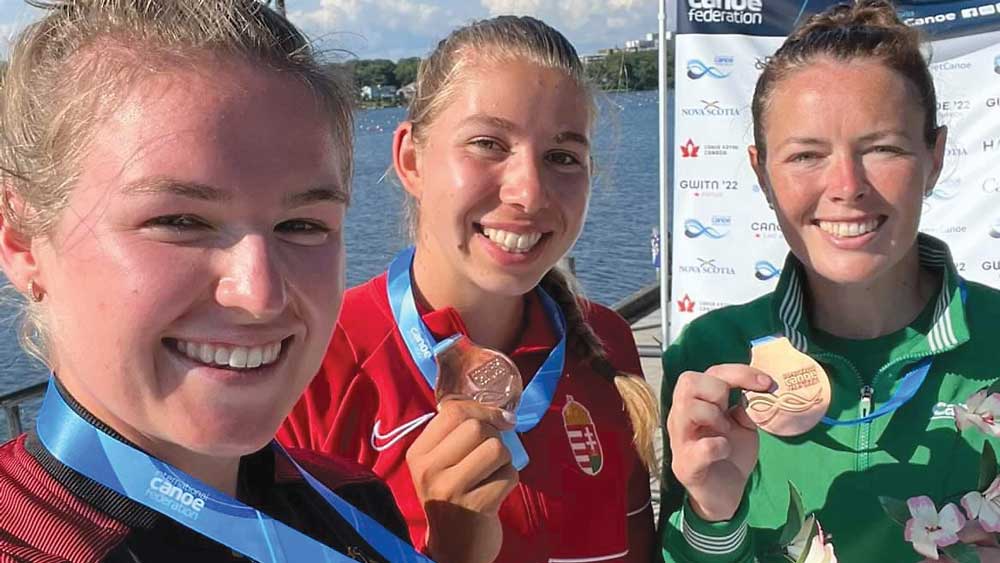 Egan aiming to build on World bronze in Munich

JENNY Egan-Simmons is hoping to build on her superb bronze medal win at the ICF Canoe Sprint World Championships in Halifax, Canada when she lines out at this week’s Europeans in Munich.

The Lucan kayaker will be out in the Women’s K1 500m heats in Germany today (Thursday) before she turns her attention to the K1 5000m on Saturday.

The first time that canoe sprint has been included in the European Multi-Sport Championships, Egan will be hoping to make another massive impact in the wake of her exploits on the world stage earlier this month.

Indeed, in Canada, Egan and her rivals had to contend with a number of new elements that have come with recent rule changes made in an effort to make the sport even more exciting for spectators.

The new K1 5000m race format, which was introduced in the World Cup in Poznan earlier this year, saw the World 5000m broken up into six laps, including one long circuit and five short laps with two portages.

Athletes could choose when to do their portages on Laps Two, Three, Four or Five.

In addition, a new knock-out (KO) rule saw the last-placed athlete on each lap instructed to leave the course when told by a judge.

“It’s just so tactical” said Egan. “I mean, there were some decisions in that race that really won me the medal.”

Egan opted to do her first portage on Lap Two when she was positioned just off the front group and, while the leading three athletes portaged again on Lap Three, she decided to remain
paddling.

It meant she overtook them and led the race from Lap Three to Five when she portaged for the second time herself after which she was overtaken by Emese Kőhalmi of Hungary and Germany’s Jule Hake.

Finland’s Sara Mihalik also crossed the line ahead of the Dubliner, but was initially disqualified after she had earlier refused to leave the course when ending up last on one of the laps after she had fallen out of her boat on her second portage.

She later appealed on the grounds that the rules did not clearly define where the end of each lap was and the decision was then made to also award her a bronze medal.

While it was a somewhat controversial close to the contest, it took nothing away from Egan’s tremendous performance which earned her the third Canoe Sprint World Championship medal of her career, following her silver in Copenhagen last season and a bronze in Portugal in 2018.

Now looking ahead to the challenge in Munich, Egan said “Every race is different and it’s been such a quick turnaround as well.

“I was only home for about five days and now I’m out in Germany. And it’s not like it was two competitions in Europe. There was a long-distance flight, there was jet-lag and everything, so I’m just trying to get over that before I start competing again” she said.