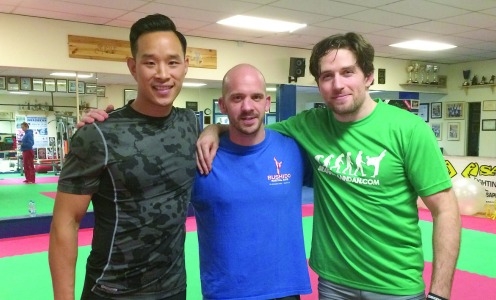 Egan was Ireland's first ever UFC superstar and former training partner to Conor McGregor and is now part of his coaching team for his upcoming fight with Jose Aldo in December.

Unfortunately for Egan, the UFC did not come at the right time back then, but he is now one of the most highly-sought-after coaches in the UFC.

Currently residing in Boston, he has made a home there for himself as one of the top MMA coaches and personal trainers in the city.

He credits his love for martial arts to BMA where he first began his journey training under chief instructor Baker and his assistant Salerno who is now head coach of BMA Clondalkin.

Egan graded for his kickboxing black belt with BMA, and competed nationally and internationally in the sport karate discipline where he was one of the top competitors in his division.

Mixed Martial Arts then became his primary focus as he was taken under the wing of SBG head coach John Kavanagh who helped him develop into one of Ireland’s first ever UFC fighters.

He is now one of the top coaches in the TUF (ultimate fighter) UFC television series as part of Conor McGregor’s team.

While visiting his family back in Newbridge, he decided to arrange a visit to his old team mate Salerno and was happy to give some insight in to the MMA world.

His class was a demonstration of stand up techniques and take down drills he uses himself during coaching and training.

“I love my BMA family” said Egan. “This is where I started and I’m honoured to be back and give a little back.

“BMA has an amazing martial arts foundation that has helped me in my own coaching and competition in MMA”.

While he has indicated that he will return to competing in early 2016, Egan’s priority is to help McGregor in his preparation for his much-awaited title fight against Jose Aldo in December.