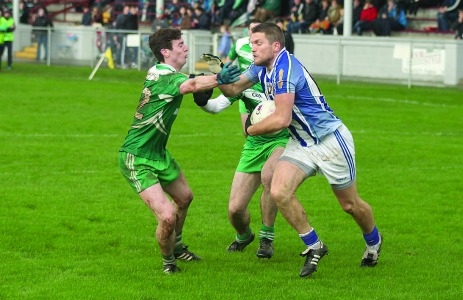 Boden poised to take on St Loman’s in Leinster semis

BALLYBODEN St Enda’s senior football team will be playing their seventh championship game in eight weeks when they go head to head with St Loman’s Mullingar on Sunday at Cusack Park.

Boden have had a hectic schedule over the past few weeks and after winning the Dublin Championship they were out in Leinster the following week.

The Firhouse Road side overcame St Patrick’s Drogheda in that encounter and set up a meeting with St Loman’s who saw off Wicklow champions Rathnew last weekend.

A big crowd is expected in Cusack Park on Sunday as Boden take on a St Loman’s side managed by Luke Dempsey and successfully defended the county title this year.

Ballyboden report no major worries ahead of this game but talented forward Ryan Basquel is definitely out for the clash.

Boden manager Andy McEntee was in upbeat form ahead of the match and is expecting a tough challenge.

“They are a very good side and have plenty of experience. They have a number of inter-county players and it’s going to be tough to get a result in Cusack Park,” McEntee told The Echo.

“Everything has gone well for us, the lads have been working hard in training and we are looking forward to the match.

“They gave St Vincent’s a good run in the Leinster Championship a couple of years ago and we know it’s going to be tough” he added.

St Loman’s have Westmeath stars John Heslin and Paul Sherry in their squad while Offaly’s Ken Casey is a big player for them.

However Ballyboden have come of age this year and after a tough Dublin Championship, they will be eager to advance to the final stages in Leinster.

Dublin star Michael Darragh Macauley will have a key role to play for Boden around midfield along with Declan O’Mahoney while in attack much will be expected from Sam Malony, Conal Keaney, Andrew Kerin and Colm Basquel.

Boden’s defence will have to be alert to the threats from Sherry and Paul Heslin and Darragh Nelson and Stephen Hiney will have to show all of their experience.

This game has the potential to be a cracking encounter and should go right to the wire.