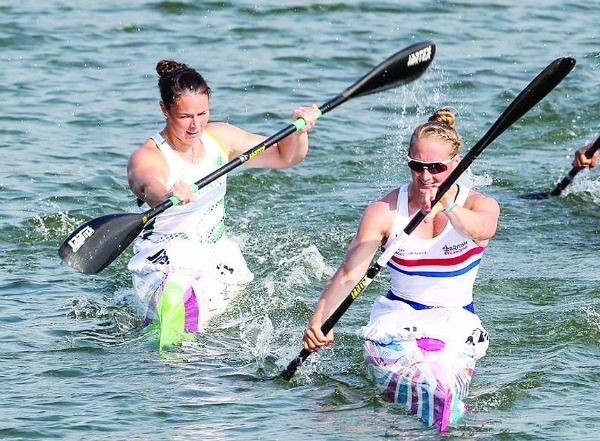 The Lucan competitor, who had just missed out on Olympic qualification in Duisberg earlier in the month, dug deep to keep pace with the leading group in this strength-sapping contest and ultimately make the podium.

“I got a really good start and was in the lead group” recalled Egan. “At the first turn, which was about 1000m, about six of us came out of it.

“I was just making sure that I was fully aware of what was going on all around me. I felt very comfortable.

“It came down to four of us with myself, Lani Belcher of Great Britain who won gold, Irene Burgo from Italy and South Africa’s Bridgitte Hartley who won an Olympic bronze medal in London over 500m.

“Bridgitte dropped off with about 700m to go and then it was a sprint finish. I tried to catch Lani but I couldn’t.

“But I was delighted with the silver. Medals like these don’t come around that often so it was great to get it” the Nissan Generation Next Ambassador told The Echo.

It marked her third medal in ICF World Cup competition having also won silver back in 2010 in Hungary and the following year in Racice- the scene of her latest achievement and that of her European Championship bronze medal win last year.

While delighted with her latest international feat, Egan has not had much time to savour it as she, this week, flew to Portugal where she will contest the next World Cup event this weekend.

Another strong perform-ance here will leave Jenny on a sound footing ahead of her upcoming trip to Moscow for the European Senior Canoe Sprint Championships.