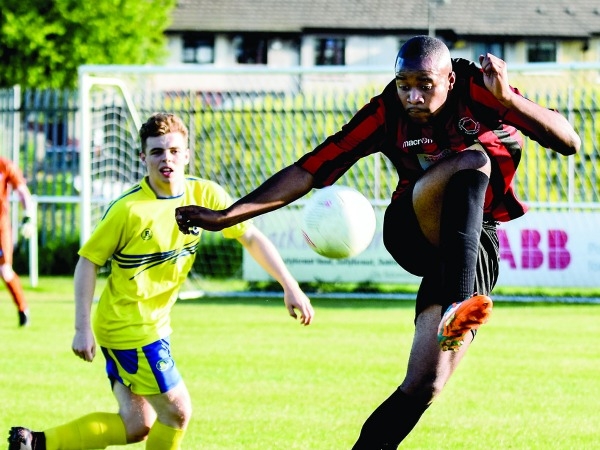 Crumlin pinch inside track to Major title from Orchard

CRUMLIN United are one win away from clinching the Leinster Senior League Major Saturday title after they secured a vital 2-0 victory over title rivals Cherry Orchard in Elmdale on Monday.

United’s defensive display proved tough to break down for Orchard who seemed to have run out of steam in the latter stages after pressing for much of the game.

Indeed, it was Crumlin who carved out the first real opportunity minutes in when Captain Brian Mooney unleashed a wicked shot with the outside of his boot only to see his effort smash off the crossbar and out for a goal-kick.

Orchard hit back with an attempt of their own when Bobby Cullen played a wonderful through-ball to Jack O’Connor whose low hard effort was well dealt with by Evan Gaffney in the Crumlin goal.

The deadlock was broken 15 minutes in when Curtis Straessle got his shot off on the right wing only for ‘keeper Andrew Callaly to parry it out to Daniel McGuinness who tapped in at the back post.

With the half-time whistle approaching Cherry Orchard pushed forward and were nearly rewarded when the in-form Adrian Rafferty lifted a wonderfully weighted free-kick into Ryan Coombes whose shot whiskered just wide of the far-post.

Crumlin could have doubled their lead moments into the second half when John Paul Reilly hit a snapshot from outside the box only to see his effort pushed away by Callaly.

Rafferty in the Orchard midfield was proving instrumental for his side and it was his dissecting ball that played in O’Connor but his strike just grazed the outside of the post before trickling out for a goal-kick.

As the game progressed Orchard pushed players forward and this very nearly cost them on the hour mark when McGuinness managed to get himself into a good position inside the area and shot hard and low, only a fine last-ditch block from Stephen Nicholl denying him.

The tie was put to bed in the 90th minute when McGuinness played a pin-point cross from the left to the unmarked David Dempsey who made no mistake in slotting home from close-range to give his side an crucial three points.