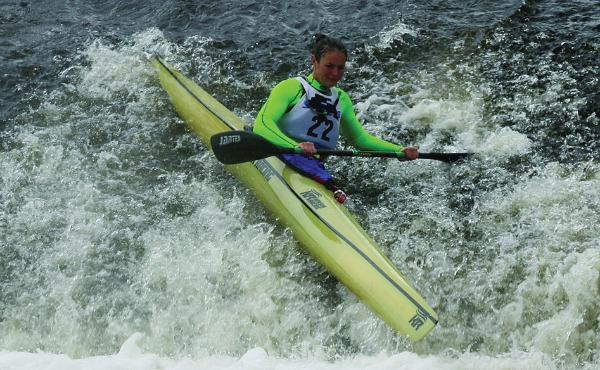 JENNY Egan brought the curtain down on her 2016 canoeing season in style after she won the Senior Women’s K1 class at the International Adige Marathon in Italy on Sunday.

Indeed the maximum 100 points gained in each of her three wins means she cannot be caught by her closest rival Kristina Bedocs even if the Serbian wins the final meet in China should she even opt to contest it.

Beating the likes of 2016 European Sprint Champion Bedocs and 2014 Marathon World Silver Medallist Lizzie Broughton of Great Britain to this year’s Classic World Series was a tremendous close to a great season for Egan who also scooped gold and silver medals in the ICF World Cup K1 5000m competition.

“It was my first time to compete in the [Adige Marathon] race and while it was not as technical as the Liffey Descent, it was a long race,” Egan told The Echo.

“I had also cut my foot badly beforehand and I didn’t know if I would be able to go [to Italy] until only a few days before.

“I could see that the swelling had gone down and luckily there were no portages in the race because if I’d had to get out and run I wouldn’t have been able to do it.

“I got a good start and I was the leading woman from start to finish. I felt good all the way,” she added.

Winning the series was made all the more remarkable given the fact that the title was not something Egan had initially targeted.

It was only after she dug out a superb win in the Ribadesella that she began to harbour ambitions of going all the way.

“The Ribadesella is one of the hardest races to win and after I did that I decided I was going to try and win the series” explained Egan.

“I decided to race K1 in the Liffey after having raced K2 for so long and I wanted to try and get the [Women’s K1] record time in that.”

It has been a hugely impressive second half to the year for the Dubliner who had to cope with the disappointment of barely missing out on qualification for the Olympic Games in Rio.

“My main goal was to qualify for the Olympics, but I said that I’d give it a good go, and if I didn’t make it I wouldn’t allow it to affect the rest of my season the way it did when I just missed out in 2012.

“I’ve had a great season since then and I’ve learned a lot about myself as an athlete and what I need to do.

“I feel I’m in a much better place now and I just want to push on and keep improving” she said.

Egan will certainly have plenty on her competitive programme for 2017 starting with the selection race for the Ireland team that is scheduled for Nottingham in April.

Also among her primary goals will be the Marathon World Championships in September in South Africa where she may also try her hand at the strength-sapping two-day Fish River Marathon contest.

On another note, Egan’s brother Peter also lined out in the International Adige Marathon for the first time and finished fifth in the Men’s K1 class.

This followed hot on the heels of his fantastic victory with Denmark’s Mads Brandt Pedersen in the Men’s K2 division of the Liffey Descent.