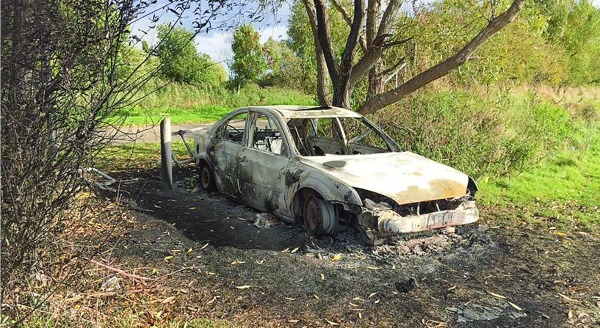 THE escalation of burnt-out cars in North Clondalkin has led to calls for extra garda patrols with Halloween around the corner.

Over the weekend, cars were burnt out in a number of areas of the Bawnogue community, and residents have reported recent activity in St Cuthberts Park, Lindisfarne, Melrose, Greenfort and along the canal.

A number of residents have reported intimidation in the park and along the canal if theyattempt to confront anti-social activity.

Sinn Féin councillor Mark Ward said the escalation of burnt-out cars has led to “mayhem” in the community.

“I’ve asked South Dublin County Council to clean them out, but the gardaí can only do what they can, with the resources they have. We need more resources,” said Cllr Ward.

People Before Profit Councillor Gino Kenny said: “There is a worrying trend where young people are driving these cars around recklessly and then setting them on fire. Unfortunately somebody’s luck is going to run out and we’ll be talking about somebody being killed.

“It’s not going to easy in trying to stop this kind of stuff so it’s important that civic bodies intervene now to prevent any more scenes like this going on. One car was on fire on Saturday when I was going by. The driver obviously was trying to gain entry onto the canal path itself. Had the car gained entry it would have done untold damage.”