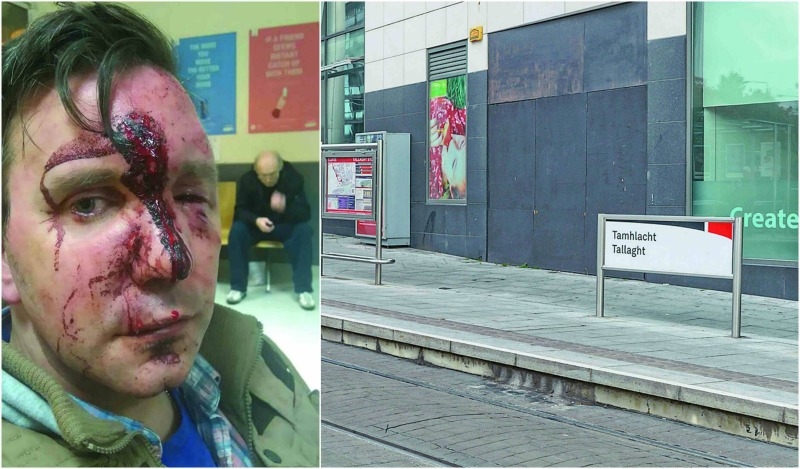 GARDAI have this week confirmed that they regularly patrol the Tallaght Luas stop area following a vicious, unprovoked assault on a 42-year-old man last weekend.

Simon Cleary had just gotten off the Luas at the Tallaght stop and was making his way through Belgard Square when he was set-upon by three young men who robbed and seriously beat the Kingswood resident – who, as reported on Echo.ie, sustained serious facial injuries during the violent attack.

Simon, who is this week recovering from his injuries, had fallen asleep on the Luas and missed his Kingswood stop.

He was trying to get a taxi home from the Tallaght terminus stop when three men came up behind him, punching him in the back of the head.

While a busy hub during the day, with a heavy footfall drawn into the area due to the Luas, The Square, the County Library, Rua Red and the nearby Tallaght Hospital, the area can be quite isolated in the evenings and at night – with local people calling for better Garda patrols and security after last weekend’s attack.

When contacted by The Echo, a senior Tallaght Garda said: “We do patrol that area regularly, with patrol cars going in and out in daily.

“There’s a lot going on in the area, pubs, The Square, the Luas, and it has a heavy footfall, so it is on our radar for patrols.

“However, we can’t be there 24/7 and when we go in and check it out, if nothing is happening, we have to move onto the next location.”

He added: “No arrests have currently been made in relation to the incident and if anybody has information we would encouraged them to come forward.”