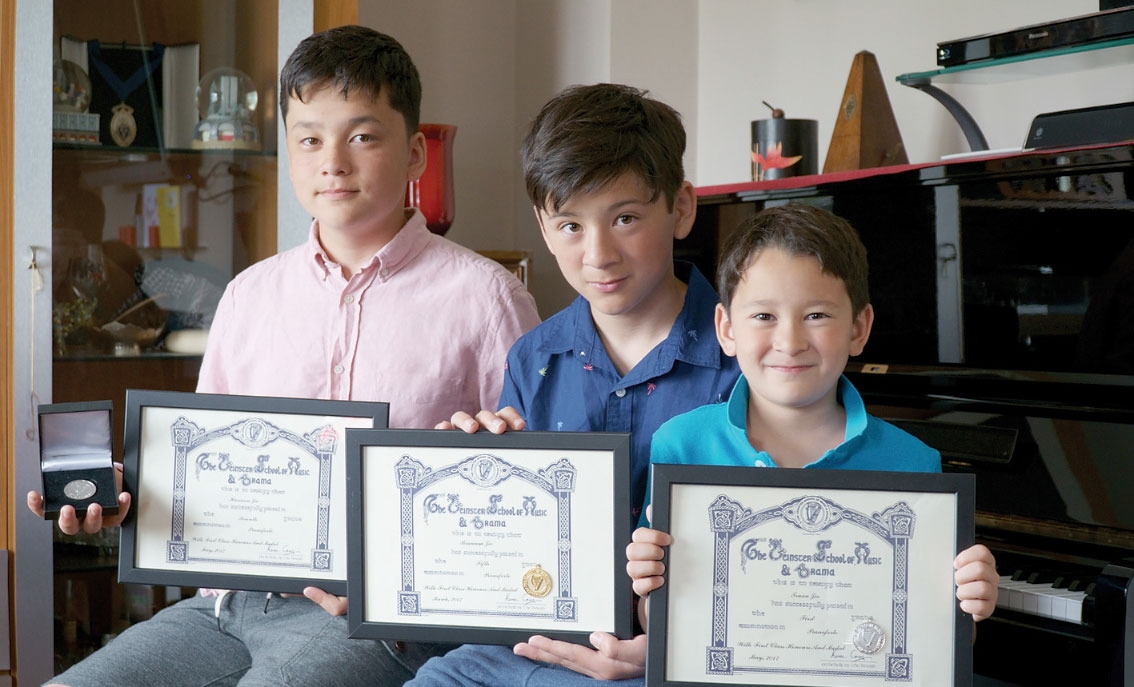 THREE LUCAN brothers have been awarded for their musical skills at the Leinster School of Music & Drama Excellence Awards at Griffith College earlier this month.

Harrison (15), Brannan (13) and Truan (8) Jio  were all recognised this year with a Special Recognition/Highly Commended award for music, playing piano.

Harrison, Brannan & Truan are taught piano in their home by Suzette Monds Das.

Launched in 2004 to mark the school’s centenary year, the LSMD Excellence Awards is open to the 15,000 students throughout Ireland who took the school’s exams in the last year.

Out of the 15,000, around 25 students are recognised in the awards ceremony.  So not only is it a great achievement, but the fact of all three awarded made it even more special.

Truan attends St Thomas Junior School in Lucan.  He is in second class and has been playing piano since he was five. He received a medal (for achieving over 95 per cent)  in his Grade 1 piano exam.

He also plays rugby for the Under 9s with Barnhall Rugby Club. He sings with the Esker Parish JAM choir.

Brannan attends The King’s Hospital Secondary School in Palmerstown and is in first year.

He has recently completed his Grade 5 exams in piano and received a medal (for achieving over 95 per cent).

He plays rugby for the under 14s with Barnhall and performs saxophone for the King’s Hospital Jazz Band.

Harrison also attends The King’s Hospital Secondary School as a 3rd year student. Harrison completed his Grade 7 exams in piano and received a medal (for achieving over 95 per cent).

This is the second time he has received Special Recognition by the Leinster School of Music & Drama.

In addition to his award by LSMD, he has also been recognised by the Royal Irish Academy of Music with a High Achiever award for Music Theatre and a Distinction (over 95 per cent) for his Speech and Drama Exam. He is also on the King’s Hospital JCT Rugby team and won a KH Sports Award for Tennis this year.

He performed in the King’s Hospital production of Annie, The Musical this November as Franklin Delano Roosevelt.