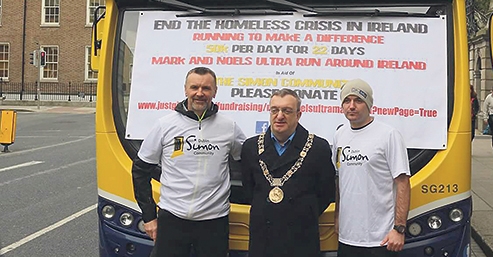 TWO local men completed the final leg of an epic journey today in Dublin city centre - 22 days after setting off on foot around the country to raise funds for homelessness.

Clondalkin resident Mark Conlon and Noel Ward, from Ballyfermot, ran 50km a day, to raise funds for the Simon Community.

During the trek, the pair met the respective Mayors of Dublin, Cork, Galway and Belfast, to discuss the issue of homelessness.

On their Facebook page, Mark and Noel thanked everyone who supported them on the “emotional journey” albeit tinged with a “sense of anger” after witnessing people sleeping rough on the streets in cities across the country.

A small team of volunteers shadowed them in a camper van, but they relied on the kindness of strangers for access to beds, showers and food.

At lunchtime on Friday, the pair arrived in Phoenix Park, and finished up by meeting with the Lord Mayor of Dublin Mícheál MacDonncha at Dublin Bus head office on Upper O’Connell Street.

The crew will put up their feet at an after party in the Penny Hill Pub in Lucan – with live music and all funds raised on the door donated to the Simon Community.

So far, they have raised close to €3,000 on their Just Giving page, to make a donation visit HERE