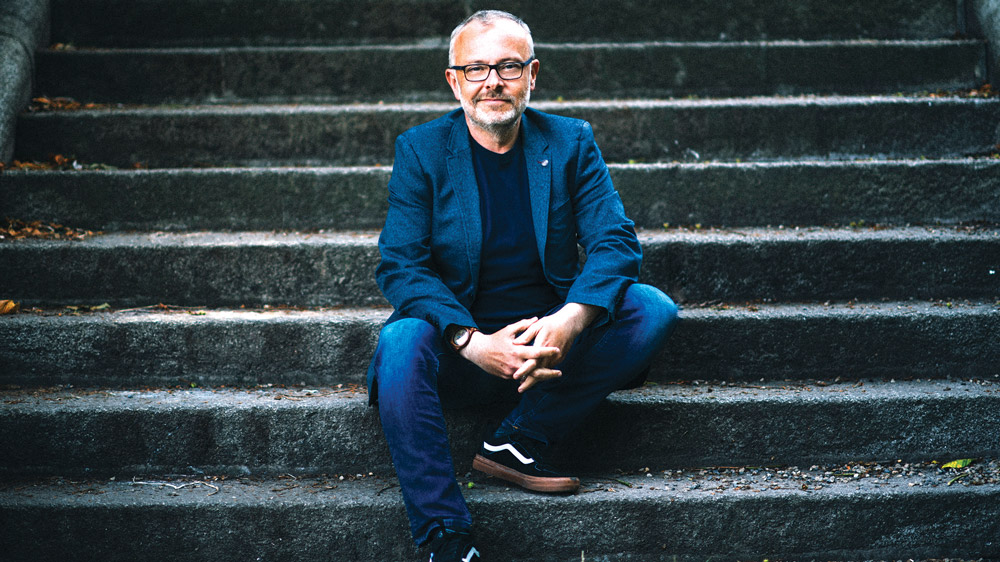 Rick O’Shea’s voice has become a familiar sound to many people around the country due to his more than two-decades-long career as an RTÉ DJ.

Now presenting the daytime show on RTÉ Gold, the Crumlin native is also well known for his years as a presenter on 2FM and Radio 1.

Away from the airwaves, Rick is passionate about books and set up the ‘The Rick O’Shea Book Club’ on Facebook eight years ago, which has gone on to amass over 40,000 members.

Rick, who is a past pupil of Drimnagh Castle Secondary School, told The Echo about his first foray into broadcasting, his passion for books, and what his teenage self would think of his career achievements.

What’s your best memory of growing up in Crumlin?

It’s such a cliché, but the big snow of 1982. I was nine and the whole world stopped moving.

Main roads had huge snow drifts on them, and Crumlin – a place that was gritty and grimy and grey in the 80s – went soft and white and quiet.

Was there a particular moment or event in your life that made you realise you wanted to pursue a career in broadcasting?

I have never had that moment, and if I ever do, you’ll be the first to know! If I’m being serious, I was at the end of my first year of Arts in UCD and I was programming the student radio station after a few months there, as well as working at weekends on a local radio station in Wicklow.

Something clicked, I took on a broadcasting and journalism course in Ballyfermot College and by the end of my first year there I’d been offered a full-time show in Wicklow.

I jumped at the chance, and all these years later I’m still staggering on. So, a ‘career’? Still not sure about that.

Can you remember how you felt when you first appeared on the radio?

It was brilliant. I was 15 and I had entered a ‘DJ for a Day’ sort of competition on Sunshine 101, a Dublin pirate back in 1988 when they were huge, and just before they were all shut down and legal stations were licensed.

I did one 15- and one 30-minute show that summer with one of their actual presenters out in their studios in Portmarnock.

All I had to do was stand there and say things I thought were hilarious and cool (I was 15, remember). I had no intention of being on radio ever again.

What has been your best experience so far as a broadcaster?

They all have reasons to stand out, and I’m sure each of them felt like they were ‘the best’ at the time. Getting offered a job in Atlantic 252, and broadcasting to the UK at the age of 20 was pretty special.

So was being brought to FM104 in Dublin a couple of years later. The job in RTÉ in 2001 came at a time when I was actually unemployed and not sure if I was going to do something else with my life, so that was extraordinary at the time and, ultimately, was a life changer.

It led me to daytime national radio for all the years I was on 2FM and now to RTÉ Gold. where I get to choose whatever I want to play every day, and then jazz on Sunday mornings.

Presenting a Book Show on Radio 1, however briefly, was an enormous thrill too and hopefully someday I’ll get to do something similar again.

Your other passion is books, what’s the first book you read that had a lasting impact on you?

A lasting impact is an interesting criterion. Probably Orwell, probably ‘1984’. I keep coming back to it again and again every few years, and it hasn’t aged since the 40s when it was written, when I read it in the 80s, and it still hasn’t in the 2020s.

You set up an eponymous book club on Facebook, why was it important to you to spread the joy of reading and encourage others to get involved?

Initially I set it up because so many people were asking me to set up one in real life, as I was talking about books online and on radio so much!

I thought something on Facebook would be much easier, and eight years and 40,000 members later I’m not so sure.

I think it’s hugely important for those of us who have any kind of public profile and love books as much as we do to talk about the things we adore. Irish media in general could do with much more space being given over to them.

If you told your teenage self, while you were a student in Drimnagh Castle, that you got to build a career combining your passions, do you think he would believe it?

Honestly? My teenage self had no idea what he wanted to do.

That I could get to spin half a career so involved in books, presenting programmes, talking to people whose work I love, judging book prizes, curating festivals?

That kid would have no idea that someone like him, a working-class kid from Crumlin, could be a part of that.

‘Daytime Gold with Rick O’Shea’ is on RTÉ Gold every weekday from 10am to 1pm.