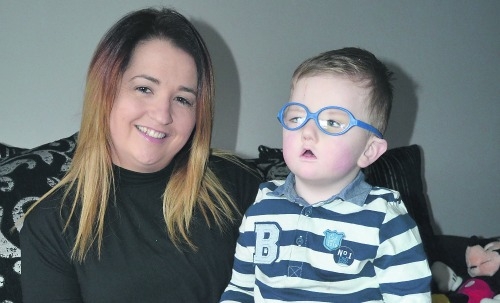 ONLY three children in Ireland are known to have a rare neurological condition called Moebius syndrome, with two of these three kids living in Tallaght.

Moebius syndrome is a rare condition that affects the muscles in the face, which primarily control facial expression and eye movement, and muscle tone in the body – and, for Tallaght two-year old Dexter Fennell living with the condition has affected his speech, eating, breathing and walking.

Due to its rarity and a lack of awareness of Moebius syndrome in Ireland, Dexter wasn’t diagnosed with the neurological condition until he was 18 months, a diagnoses which was reached after his mother Mags Purtill Fennell turned to the internet.

Mags, who lives in Brookview, told The Echo: “Moebius can be detected at birth but because it is so rare in Ireland nothing was noticed with Dexter when he was born and he was sent home.

“However, alarm bells were raised when Dexter couldn’t feed, we’ve since learned that his tongue is partially paralysed, so he couldn’t suck and was crying all the time from the hunger.

“He was put on a feeding tube at three weeks but it wasn’t until he was 18 months that he was properly diagnosed.

“I turned to the internet for help even though doctors told me not to but it was here that I came across Moebius Syndrome.”

She added: “This syndrome is very rare here in Ireland, there are three children and four adults known to have Moebius, and we communicate and support each other – with online support from families in America too.

“One of the other children with Moebius unbelievably lives close-by in Killinarden.

“We couldn’t believe that a 15-year-old girl with Moebius syndrome was living so close to us, and it has been a great help to myself and Dexter.”

Tegan Bracken O’ Reilly, a student at St Mark’s secondary school in Springfield, is living with Moebius syndrome, and while she has no movement in her face and has endured years of physiotherapy and speech and language therapy she is living life to the full and grabbing every opportunity.

“Tegan is an amazing teenager who is so intelligent and doing well in school – she is not letting Moebius hold her back”, Mags said.

“Initially I had read some very scary stories about Moebius syndrome but seeing Tegan and how well she is doing has made me look forward to Dexter’s future – she really is an inspiration.

“Tegan and her mam Lesley have been a great support to us and we have now decided, together, to create Ireland’s first national Moebius support and awareness group.”

Mags and Lesley have established Moebius Syndrome Ireland which aims to raise awareness around the condition, offer support, provide a social network for families and also flag the symptoms for GPs, doctors and new parents.

Mags said: “My GP had never heard of Moebius syndrome until I told him, and this is pretty much the case nationally.

“Through Moebius Syndrome Ireland we hope to raise awareness and organise different social and support events for adults and children diagnosed.”

International Moebius Day is this January 24 and an awareness dinner is being staged by Mags, Lesley and other Irish families in the Red Cow Moran Hotel.

The new group Moebius Syndrome Ireland and its Facebook page will also be launched on the day.
For further information or to attend on the day, email moebius syndromeireland@gmail.com