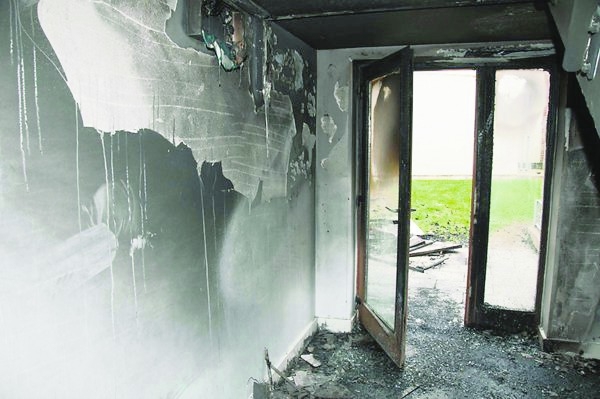 A NUMBER of Tallaght families who were rescued from a blaze in their Tallaght apartment block on Monday have claimed that an absence of fire extinguishers and a dedicated fire exit put lives in “serious danger”.

Fire units were called to the Mac Uilliam Lane apartment complex, off Fortunestown Lane, on Monday evening after a fire was started in one of the six-unit blocks which, lit in a communal stairwell, filled the three-storey premises with smoke – trapping a number of families with young children.

Dublin Fire Brigade had five units and three ambulances on the scene, with firefighters entering the premises and bringing residents to safety – all of whom are this week living in hotels while repairs are been carried out.

Yvonne O’Connor, whose daughter lives in the block with her son, told The Echo: “If this had happened in the middle of the night these families would have been lucky to get out.

“There are no fire extinguishers and no dedicated fire exit, which puts families in serious danger – and the only way out of the block is down at the bottom of the hall – which is where the fire was.

“My daughter had to feel her way down the stairs through the smoke and she found two of her neighbour’s young girls trying to get out on her way down.”

After everybody was evacuated from the building, a number of people, including children, were brought to hospital, while others received oxygen therapy treatment at the scene.

The block is managed by Oaklee Housing Trust on behalf of South Dublin County Council and, according to some residents, numerous calls have been made to Oaklee concerning fire safety and the front door which, opened by a key fob, can be easily pushed in.

Describing the fire as “malicious”, a spokesperson for Oaklee Housing Trust told The Echo: “The communal fire alarm system was activated and tenants evacuated the building safely.

“Tenants and their families have been provided with accommodation at a local hotel whilst repairs are being carried out. It is anticipated that the tenants will be able to return to their properties early next week.”

When asked about fire safety regulations, the spokesperson said: “Oaklee Housing Trust is responsible for fire safety equipment at Mac Ulliam Lane which is regularly serviced and maintained.

“Fire extinguishers are not required in communal areas of the property and fire escape is provided as per the building design.

“Staff are continuing to liaise with tenants and the fire authority to establish the root cause of the fire and help in any way that we can.”

South Dublin County Council confirmed it has met with both residents and Oaklee, which will be in touch with tenants directly regarding a return to their homes.

Neither South Dublin county Council nor Oaklee replied to a question by The Echo about plans for a fire safety review of the whole complex.

Gardaí at Tallaght garda station were at this stage unable to confirm if the fire was lit accidentally or maliciously, with investigations ongoing into the blaze – which is believed to have started when a piece of furniture was ignited.