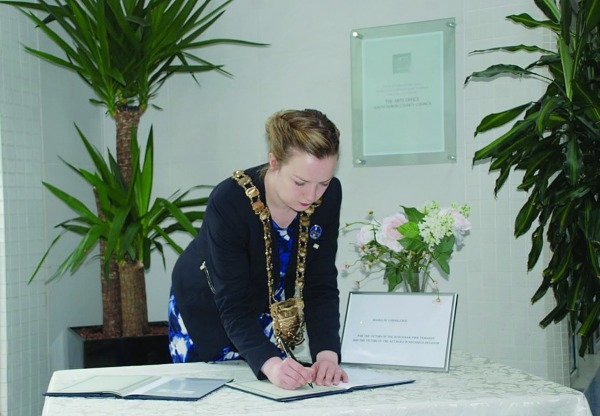 A BOOK of Condolences for the victims of Tuesday’s attacks in Brussels has been opened in County Hall by Mayor Sarah Holland, who was on a flight to the Belgian capital when the tragedy struck.

Mayor Holland was en route to Brussels to take part in a commemoration of 1916 in the European Parliament and was only ten minutes from landing in Brussels airport when the explosion happened.

Diverted to Amsterdam, Mayor Holland told The Echo: “We only realised the extent of the attack when we landed in Amsterdam and heard of the second explosion in the metro station, and the number of people who had died and were injured.

“Initially we thought the diversion was due to air traffic controller strikes, but to hear what had really happened was horrific – it was such a terrible tragedy.

“In these situations you try to stay calm and it was only when I got back to Ireland, that the losses really hit me.”

Speaking after opening the Book of Condolences on Wednesday, Mayor Holland said: “We opened the book to show solidarity with the people of Brussels and to let them know that we are thinking and praying for the country, those lost in the attacks and the families left behind.”

The Book of Condolences was opened in County Hall, Tallaght, on Wednesday, March 23 and remains open for one week.