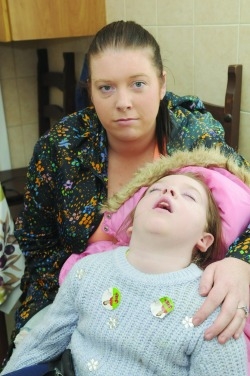 A YOUNG mother has been left “frustrated and fed-up” that she cannot live in her own home with her young daughter, who suffers from a rare brain dysfunction, due to unfinished works by South Dublin County Council.

Lisa Cawley lives in Harelawn with her five-year-old daughter Erika who uses a wheelchair and has several seizures a month leaving her needing around-the-clock care for Dravet Syndrome.
The five-year-old suffers from the rare genetic epileptic dysfunction of the brain causing her to have seizures and affects every aspect of her life.

Earlier this year the council agreed to build an extension to the house for the family to help with Erika’s mobility issues.
The council completed the necessary extension to the family home in Clondalkin but left holes in the ceiling and an uneven floor surface which is dangerous for Erika according to Lisa and her grandfather, John.
John told The Echo that although his daughter was satisfied with the extension she was hugely disappointed to find cement gaps in the floor of her home where a dangerous fireplace was removed and boxed off pipes protruding from the wall – which could be dangerous for his granddaughter who uses a wheelchair.
He said: “Erika’s occupational therapist and her social worker asked how the council would rectify the situation and were told that the council is not an interior designer for tenants and that flooring and remedial works would be at our own cost.”
Due to the unlevel floor and gaps where the fireplace was removed the family had to get workmen out to fix the problems before Lisa and Erika could move back in.
Lisa said: “I regret getting it done at all. I have been out of the house longer because I can’t afford to get things done. I’m just fed-up at this stage.”
The mother-of-one hopes to move back into the house this weekend after leaving in January for the work to be done.
However, she has been told that a rent bill for more than €300 must be paid even though she hasn’t been able to live in the house for four months.
She said: “I have to pay nearly €350 on top of what has gone on the house already, they sent me out a letter to say I owe it in rent.”
A spokesperson for South Dublin County Council said: “It is not the policy of the Council to comment on individual cases. However meetings between the family and their OT as well as the Council are continuing in relation to a number of issues around the extension and the role of the family in same”.