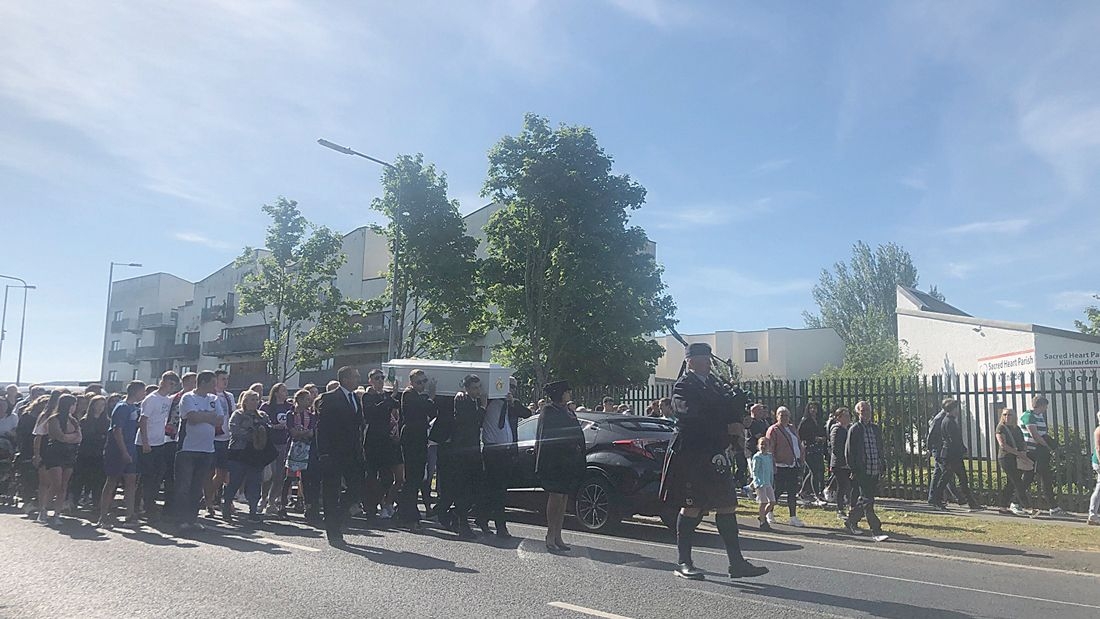 Family thank hospital staff and residents for all their support

MOURNERS walked from Alex Ryan Morrissey’s home to Sacred Heart church this week, as friends and family remembered the much loved 15-year-old who tragically passed away on Wednesday, May 20.

Alex, who was a massive Shamrock Rovers fan, tragically passed away after he was found unresponsive in the Ballycullen area on Wednesday, May 20.

Mourners carrying the coffin on Monday to Sacred Heart church

Emergency services were called and the young teenager was taken by ambulance to the Children’s Hospital Crumlin, where he sadly passed away.

Alex’s family has since expressed their sincere gratitude to the ambulance paramedics, hospital staff and residents of Ballycullen for their “kindness, support and help during this difficult time”.

On Monday of this week, mourners, who were led by a piper, made the sad walk from Alex’s Cushlawn home to Sacred Heart church, where a restricted funeral service was held for the much loved teenager.

Such was Alex’s standing with Shamrock Rovers that his favourite player Aaron McEneff posted a social media message the morning after the teenager’s sad passing, sending his condolences to the family.

In a touching video, Hoops midfielder McEneff said: “I know Alex was a diehard supporter of the club.

“As a player from the club I would just like to pass out my condolences to all Alex’s family and his friends.

“It is a very sad time and actually heart-breaking that someone is taken so young.

“I just want to let everyone know that my thoughts and prayers are with Alex’s family and all the Shamrock Rovers fans that knew him.

“Rest easy Alex and keep looking over us.”

The heartfelt message said: “Alex was a normal happy 15-year-old child loved by all his family.

“He was a season ticket holder for Rovers and loved attending the matches home and away.

“Alex’s Mam and Dad are appealing for information to the circumstances of his death.

“Please get in touch if you have information.”

Alex is remembered by his parents Aine and Mick, his brothers and sisters, extended family and friends.

Speaking with The Echo this week, Cllr Richardson said that Aine and Mick were very thankful for the community’s support in recent days.

According to a Garda spokesperson: “Gardai responded to reports of a male youth found unresponsive in the Ballycullen area, Dublin on the 20th May 2020 at approximately 11:00pm.

“The male youth was taken to The Children’s Hospital, Crumlin by ambulance where he later passed away.”

The spokesperson added that the results of a post-mortem will determine the course of the investigation.