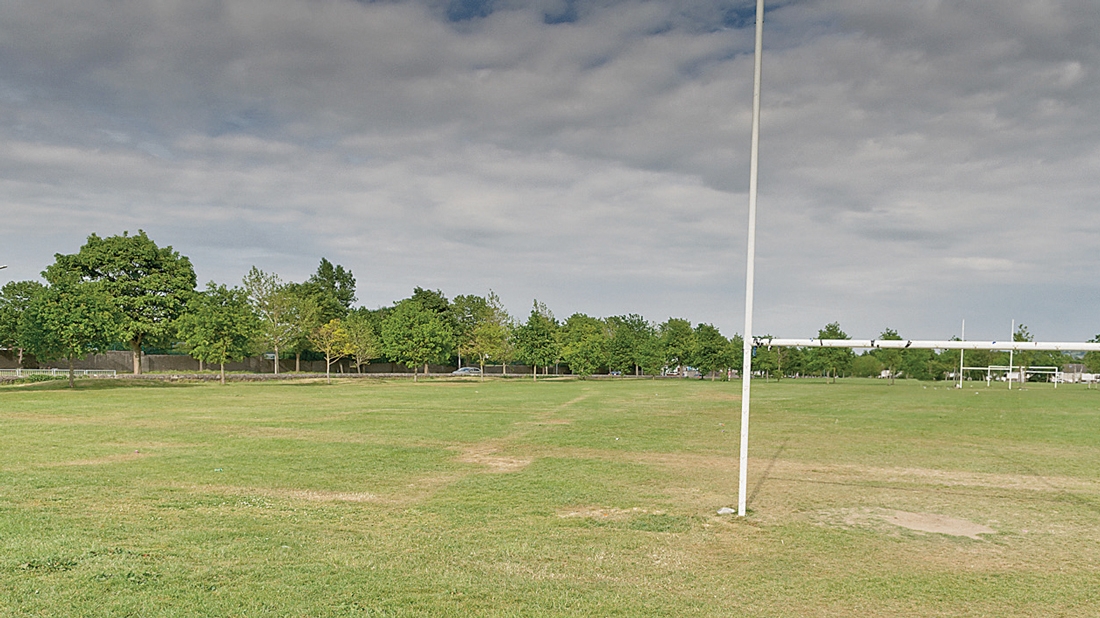 LOCAL history lost to time is revealing itself in one Tallaght park as the warm weather gives a glimpse into what may have once stood above the ground.

Members of the St Martin’s Residents Association recently reached out to local politicians after the dry weather revealed what they believed could be a “historic gem” on the park in Aylesbury.

The markings on the pitch

Aerial images of the park were showing parch marks, which appear in dry weather in parched fields – sometimes revealing sub-surface features or archaeological sites not visible from the ground.

After viewing aerial images of Aylesbury Park, residents queried if the parch marks, which are located at the Tymon Bawn Community-end of the field, were revealing the buried history of Old Bawn House.

According to the Department of Arts, Heritage and Gaeltacht, Old Bawn House was erected in 1635 by William Bulkeley, Archdeacon of Dublin, most likely on the site of an older building.

The Department was made aware of the residents’ discovery by Colm Brophy TD.

In a reply to Deputy Brophy, the Office of the Chief Archaeologist thanked residents for informing them of the recent parch mark – stating that they were now “in a position to correct the location” of the buried remains of Old Bawn House on their digital maps.

The updated digital maps will be made available to the local authority to download.

The response added: “Imagery from both 2013 and 2018 during drought periods also indicate the main features of the southern block of the house which was built to a H plan.”

In a summary provided on Old Bawn House, the Office of the Chief Archaeologist said that the house was two-storeys high with a gabled and dormered attic level, which followed a H plan.

A Tudor-style house set on an estate with a series of outbuildings, a long avenue, gardens, orchards and several fish ponds, Old Bawn House was damaged in the rebellion of 1641.

However, according to the Office of the Chief Archaeologist, it was restored at ‘the great cost of £3,000’.

Within the house was a parlour mantelpiece, which is held in the National Museum of Ireland and bears a date of 1635.

Demolished to the ground in 1976, the house’s original staircase is also in the National Museum of Ireland.

A drawing of Old Bawn House which was erected by William Bulkeley, Archdeacon of Dublin in 1635

Tara De Buitlear of Tallaght Community Council (TCC), who has been working alongside St Martin’s Residents’ Association, said: “It’s fascinating that this has become visible.

“It’s the first time in a generation that people are aware of what Old Bawn House was and where it was.

“Hopefully residents can work with the council in exploring what options there are.

“Can anything be done to survey the site?”

“It’s a very interesting historical find and the council are aware of it and are going to investigate”, Cllr Duff said.

However, the historical plot thickens this week in relation to the parch marks that have appeared on Aylesbury Park.

South Dublin County Council has since carried out a brief investigation and believes that the parch marks are likely not associated with Old Bawn House.

In a comment to The Echo, a council spokesperson said: “SDCC has carried out a brief investigation on the old ruins in Aylesbury Park.

“The location refers to Aylesbury Park so the outline is likely not Old Bawn House, which was further east on the historic maps.

“SDCC have checked on site and there are no structures appearing above ground; it would appear to be an outline of the old building appearing as a dry section of grass.

“The historic map viewer on OSI.ie, the Historic 6” last edition, names this structure as part of a complex named Park House.

“On earlier editions of historic maps it was referred to as a paper mill.”

The council added: “SDCC can confirm there is no structure above ground therefore does not come under architectural conservation.

“The images and the outline on the ground shown on the OS maps indicates markings possibly from foundation of a former structure, which are not associated with Old Bawn House as referred to by local residents in comparing the site on the historic maps.

“This can only be identified as a local heritage feature and may be of interest to National Monuments.”

Believing the council needs to come back with a “definitive answer”, Deputy Colm Brophy said: “The council should work with local historians, the community really wants to know what this is.

“I hope South Dublin doesn’t just do a brief investigation, we need to track down this heritage.

“If it’s not Old Bawn House, what is the history behind this other building.

“I look forward to the council carrying out an investigation and giving us an update.”