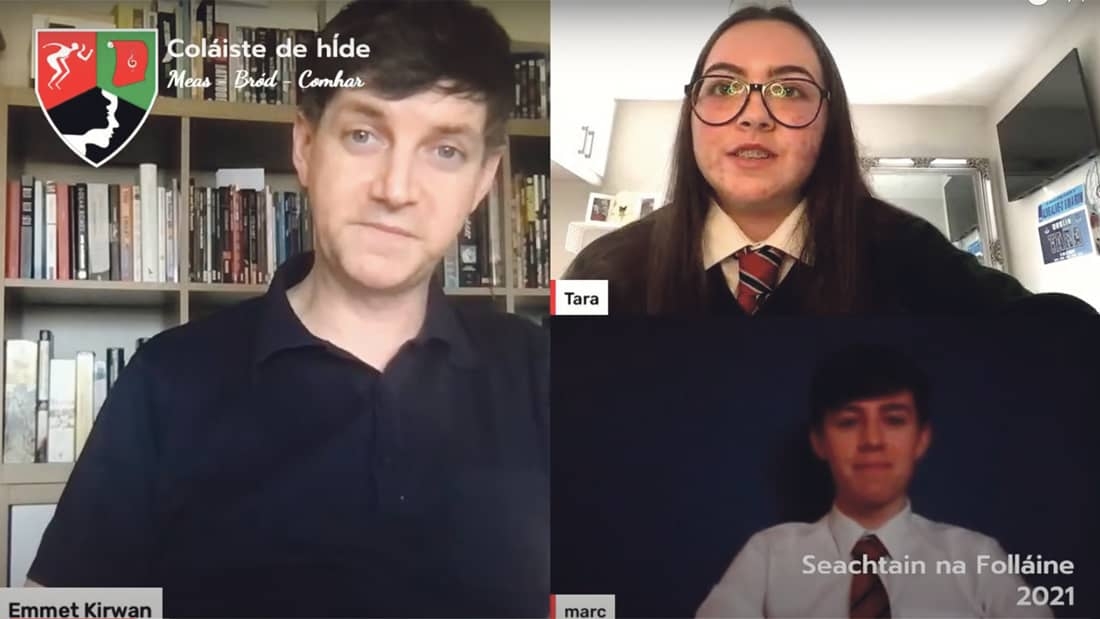 A HOST of famous faces offered advice and positive messages when they were interviewed by students from Coláiste de híde last week, as part of the school’s Wellbeing Week.

Emmet Kirwan from Tallaght, and Bressie talking to the students from Coláiste de híde last week, as part of the school’s Wellbeing Week

The idea for the interviews came about after the principal of Coláiste de híde, Conchubhair Mac Ghloinn, had a conversation with Senator Lynn Ruane, whose daughter attends the school.

“We were talking about the current situation and how students are getting frustrated at home,” Mr Mac Ghloinn told The Echo.

“There’s a lot of people who’ve been very down in themselves and depressed during this lockdown.

“Senator Ruane proposed reaching out to a few of her celebrity friends to see if they would be willing to join our students for an interview regarding wellbeing during this difficult period.”

The students, some of whom were prefects or on the student council, carried out seven interviews in total. This allowed students to sharpen their interviewing skills and get some sage advice from people they admire.

Bressie talking to the students from Coláiste de híde last week, as part of the school’s Wellbeing Week

Emmet Kirwan spoke about his time as a student in Trinity College and his career in the arts, Bressie talked about mental health and his time as a professional athlete, and Louise O’Neill offered tips for staying mentally healthy and spoke about her time as a fashion intern in New York.

The interviews were livestreamed for pupils and parents last week, with the help of Gael Linn on the technical side of things.

“Student voice was to the fore by our students, who prepared the interviews and then took the guests to task,” added Mr Mac Ghloinn. “They researched each person and each guest had a message.

“The students were brilliant, and I think they were very proud of it.

Anna Geary talking to the students from Coláiste de híde last week, as part of the school’s Wellbeing Week

“I sent emails to the guests afterwards, thanking them for doing the interview, and a few of them came back with comments saying that they thought the students were excellent.”

While the school is currently only open for sixth year pupils, Mr Mac Ghlionn hopes that when the school can fully reopen the students will be able to watch the interviews and explore them in more depth with their classmates and teachers.

“I think it was all very positive,” he said, “and it’s a massive achievement for a school with 300 pupils to get guests of that calibre to talk to our students.”