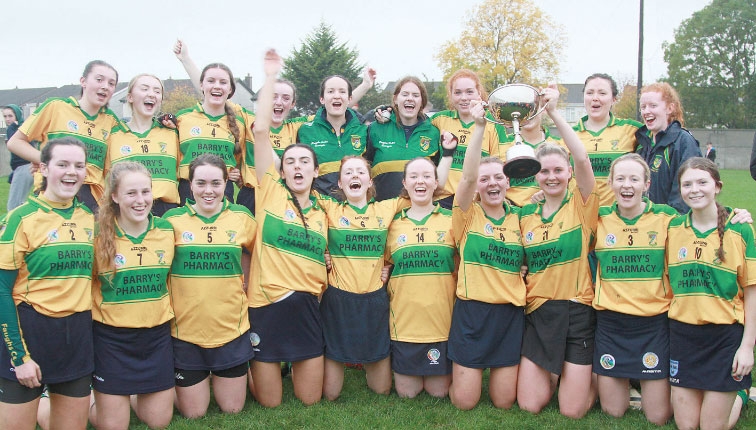 Faughs do enough to lift title

The Templeogue side had to hold off a brave challenge from Good Counsel as they emerged 1-11 to 4-1 winners in an exciting showdown.

Faughs had the better of the opening half exchanges and by the interval were 1-6 to 1-0 in front and looked in a commanding position.

Indeed it could have been more for Faughs in the first half as they failed to convert possession into scores while Counsel registered  their goal on the stroke of half time from the penalty spot.

Player of the Match, Kerrie Finnegan and Francis McCann sent over points to settle Faughs while Costelloe, Ryan and Kate Holland kept the umpires busy as their side enjoyed good periods of possession.

Faughs got a well-deserved goal through Saoirse Mallin as they established a six-point cushion by the break.

The Counsel goal in the opening half was scored by Kirsten Farrell to keep her side within shooting range.

However after working so hard in the opening half, it was now the turn of Good Counsel to come back and that they did, with Beth Whyte and Farrell netting goals.

Whyte’s goal came from a high ball sent in which dropped into the back of the net while Farrell scored her second goal when a free deflected to the target to level matters.

Holly McGregor got the Counsel point in a lively second half encounter.

Faughs were under pressure mid-way through the second half as Counsel looked dangerous in front of goal.

Costelloe, Finnegan and Ryan added scores for Faughs as the game hung in the balance right up to the final stages.

Indeed Counsel took the lead through McGregor heading into the home straight before Faughs ‘Emma Ryan levelled with a point in injury time.

Then in a dramatic conclusion to the contest, Faughs went on one final attack that saw Olivia Rushe pulled down as she went through on goal and a free was awarded.

Up stepped Costelloe to send over the winning point. Counsel did have one more go in the closing seconds, but hey could not find an equaliser.

It was a superb win for Faughs and one that helped the Templeogue side make up for losing out in the final after a replay last year. .