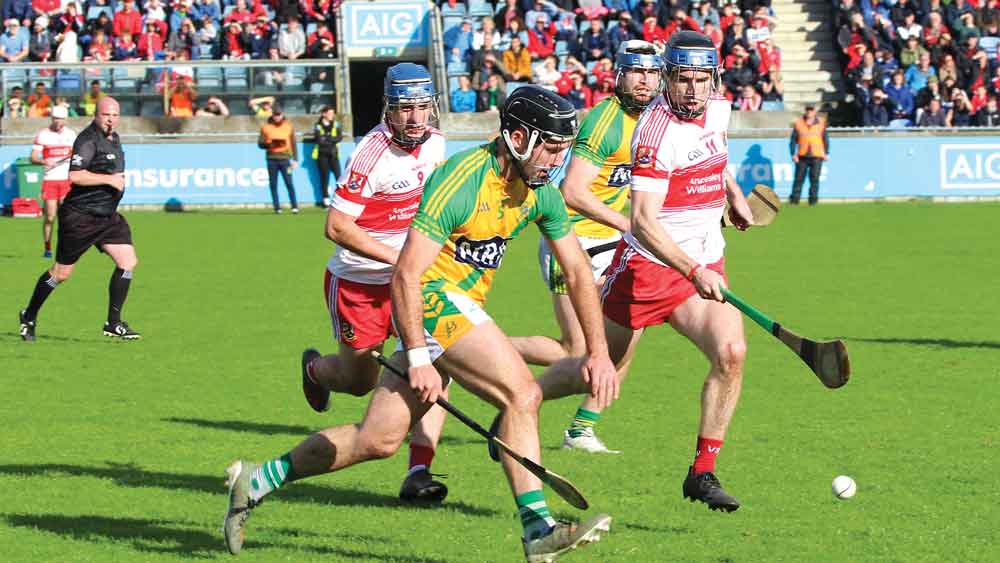 Jack McVeigh of Faughs challenges for the ball during the replay at Parnell Park (Photo: Stephen Croke)

FAUGHS and Whitehall Colmcille will face off in a forthcoming Dublin Senior Two Hurling Championship final replay after James O’Brien’s dramatic injury-time point helped the Templeogue side to claim a 2-18 to 0-24 draw at Parnell Park on Sunday.

Despite already having secured their return to the Senior One championship – alongside Whitehall – for 2022, Johnny Greville’s charges were eager to round off a memorable campaign with a piece of silverware to show for their efforts.

Although Faughs took a while to settle, Ciaran Brennan shook the net on eight minutes to edge them into the ascendancy.

Paddy Spellacy and Conor Sheedy were doing much of the heavy lifting in the Whitehall attack, but Brennan and O’Brien – who registered a combined tally of 2-9 – did likewise for Faughs.

Ciaran Brady, Carl O’Mahony and David Croke were also on target as the action progressed in what was proving to be an enthralling contest.

Yet Dublin senior footballer Cormac Costello was starting to come into his own for Whitehall and the Collins Avenue side ultimately led 0-14 to 1-9 at the interval.

Faughs initially remained in arrears on the restart, before receiving a major boost on 38 minutes. After Whitehall netminder Ronan Murray did well to keep out a fierce Liam Mostyn shot, Brennan batted the rebound to the net for his second major.

Brennan’s confidence was now sky high and he doubled the Faughs lead by splitting the uprights moments later.

Despite Sheedy, Spellacy and Costello keeping the scoreboard ticking over for Whitehall, points from O’Mahony, Conor O’Shea and Niall Fitzgibbon had the southsiders two points in front on 52 minutes (2-16 to 0-20).

Faughs appeared to hold all the aces when opposition attacker Sean Foran was issued with a straight red card, but Shane Noonan’s northside outfit dug deep to leave the teams level heading into five minutes of stoppage-time.

Faughs were then reduced to 14 players themselves when Gavin Kenny received a second yellow for hauling down dual star Eoghan O’Donnell and with Spellacy converting the resulting free, Whitehall were on the brink of victory.

That was until O’Brien knocked over his sixth point of the tie on 64 minutes to ensure another game will be required to determine the winner of this year’s second-tier competition.

There was disappointment for Faughs’ second adult team in the Dublin Junior ‘B’ Hurling Championship final at O’Toole Park on Saturday afternoon when St Oliver Plunkett’s/Eoghan Ruadh had one point to spare (2-14 to 2-13) against the Tymon Park men.