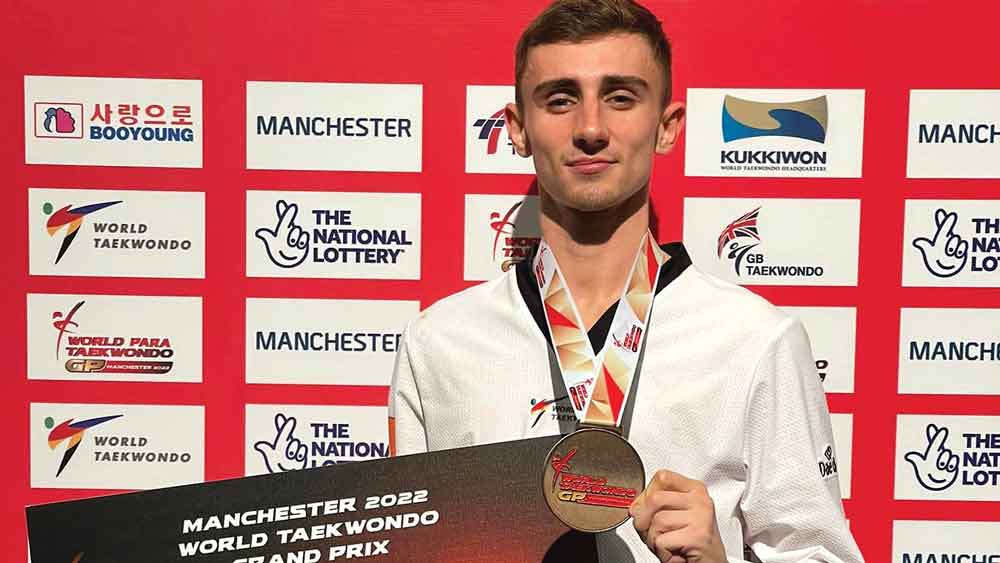 Jack Woolley with his medal in Manchester

Woolley was in a confident mood ahead of this event, which hosted the world’s top-32 fighters in the various Olympics weight classes. Competing in the -58kg male flyweight division, Woolley – who operates out of the South Dublin Taekwondo club in Tallaght – was given a bye into the round of 16.

This is where he found himself face-to-face with Josip Teskera and despite having to look on while a host of fighters got to showcase their talents in the initial round of 32, Woolley didn’t take long to settle into his familiar groove.

While the Croatian Teskera delivered a spirited effort, the 24-year-old Dubliner convincingly won both rounds of their bout.

Stiffer tests were lying in wait, however, and the spectre of current European champion Cyrian Ravet ensured Woolley was on his toes for the quarter-final phase of his division.

In addition to being the most recent champion of the Grand Prix in Paris, French fighter Ravet also edged out Woolley to earn a silver medal at the European Championships in the same arena earlier this year. Yet this helped to make Woolley all the more determined to advance and the first of three rounds in this last-eight encounter went his way.

Ravet responded by claiming the second round and thus making sure their duel went right down to the wire. In the end, it was Woolley who earned top honours on a score of 2-1.

Next up for him was a semi-final meeting with Tunisia’s Khalil Jendoubi, an Olympic silver medallist.

Woolley fought admirably throughout his third fight of the day, but his opponent ultimately progressed to the final (where he lost out to Korean teenager Tae-Joon Park) on a winning margin of 2-0.

While a keen competitor like Woolley was naturally disappointed to miss out on a final spot, he was able to gain considerable solace from this Grand Prix event.

As well as climbing the podium to receive a hard[1]earned bronze medal, he also garnered 21.6 World and Olympic points.

With one Summer Games already under his belt – last year’s delayed spectacle in Tokyo – Woolley will be hoping to continue on an upward trajectory ahead of the 2024 Paris Olympics.