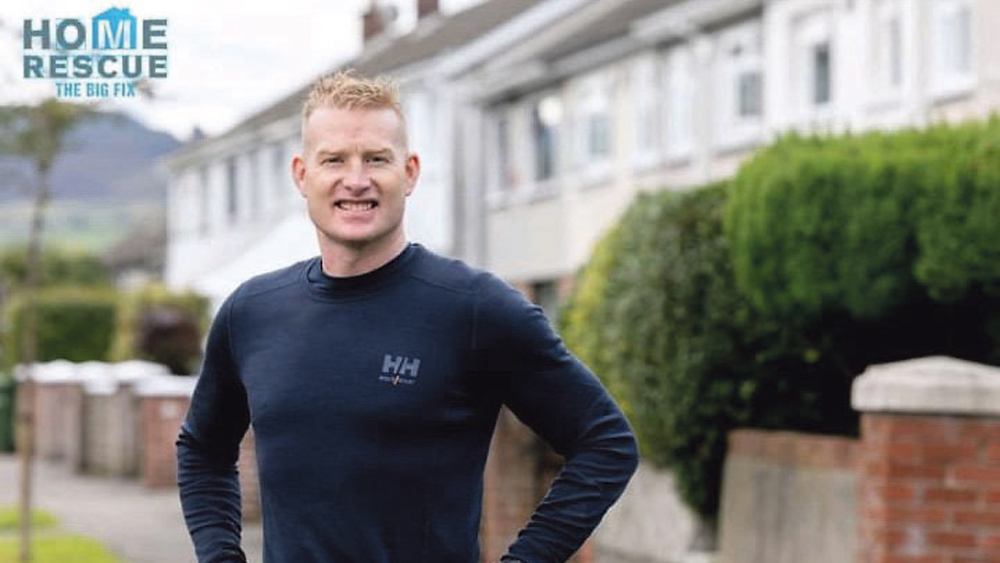 Finn to the rescue . . . Home rescue’s Peter Finn talks about his tv work

For builder Peter Finn, who stars in RTÉ’s home renovation show ‘Home Rescue’, the greatest satisfaction in his work comes from seeing the life-changing impact a redesigned home can have on people.

Now 46, the Saggart native started work as a teenage apprentice with the late Hughie Reilly, a popular and respected housebuilder who built many of the one-off houses in Saggart, Brittas and Newcastle.

Peter’s apprenticeship set the foundations for his career in construction, which saw him initially develop his skills as a carpenter before working in the house-building industry.

In recent years, Peter, who is a past pupil of St Mark’s National School in Springfield and Holy Family Community School in Rathcoole, has become a familiar face to many through his work on home improvement shows on RTÉ.

Peter told his local paper, The Echo, about Hughie Reilly’s impact on him when he was a young apprentice, what he finds most fulfilling about his work – and his first foray into TV on RTÉ’s ‘Treasure Island’ in the 2000s.

How did your career in construction begin?

I’d always had an interest in construction, and I’d do one-off house builds with him. He was an absolute gentleman. He had great integrity.

He wouldn’t do anything unless it was 100 per cent and that stood to me right from the start of the apprenticeship.

How did your involvement in TV work come about?

Myself and my business partner, Mark Flynn, had done a few different jobs for an engineer and he was asked to be involved in ‘Room to Improve’.

He wanted to work with contractors that he’d had a previous relationship with, so he put our names forward.

Within a matter of weeks, we were on the job. ‘Room to Improve’ is a great show.

I got on very well with Dermot Bannon, and I understood that it was a TV show and not a construction show, so they kept asking me to come back and do more. We did seven different episodes for them.

Were you nervous the first time you were in front of the camera?

I was a little bit conscious of what I was saying, because I was representing our company – Finn and Flynn Construction – and it was the first series of ‘Room to Improve’ so we couldn’t watch the show to see what it was about.

But I’ve always been confident in front of the camera, and they record an awful lot but only use snippets, so there’s no need to be nervous.

Was your appearance on ‘Room to Improve’ the first time you were on TV?

No, I was on the first series of a survival show called ‘Treasure Island’ when I was in my mid-20s.

We were on an island in Tonga. It was an amazing experience. I didn’t win, but I got to the final. It was my first foray into television, and ‘Room to Improve’ was about ten years later.

You’re a co-host and builder on ‘Home Rescue’ alongside architect Róisín Murphy, why did you decide to take part in the show?

I originally said no to it, because I thought it was just a home improvement show.

But, and I know this sounds corny but it’s true, it very genuinely changes people’s lives.

When we see the reveal, it makes it all worthwhile. It’s hard work with long days, but when you see people crying and the impact it will have on their lives, it’s a fantastic feeling.

It’s a team effort, and it’s brilliant to be involved in something so positive.

Is there any job you’ve done on the show that you’re particularly proud of?

We’ve done some amazing ones over the years. On the last show of the last series, there was a lady who’d had cancer and had surgery on her brain, and had lost sight in one of her eyes.

We changed the downstairs of her house and it changed her life completely.

Since the onset of the pandemic, a lot of people have been doing DIY projects. What advice would you give to people carrying out these projects?

The first thing I’d say is that they should actually start the project and just do it. Obviously, there are certain jobs I’d say not to do, like electrics and plumbing, but they can do things like painting, laying a floor or putting up a garden fence.

The feel-good factor, and the sense of achievement at the end, is really brilliant.

The latest series of ‘Home Rescue’ is available now on the RTÉ Player.