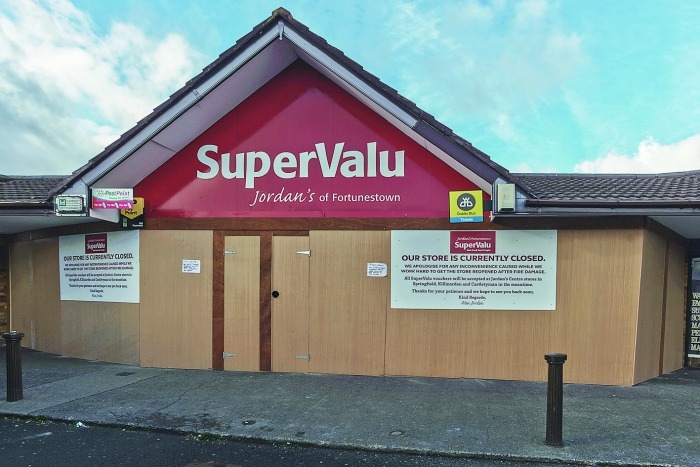 Fire-stricken SuperValu store to open again as soon as possible

THE owner of the SuperValu in the Fortunestown Shopping Centre in Springfield, which was gutted by fire last week, has confirmed to The Echo that he will re-open the busy local supermarket.

Last Thursday, November 3, a serious blaze broke out in the supermarket which, employing 38 people, engulfed the local shop.

As reported on Echo.ie at the time, the quick action of staff and security resulted in everybody in the shop being evacuated safely, with no injuries reported.

Owner Alan Jordan, who took over the shop in May, this week told The Echo: “I am just thankful that nobody was injured, that is the most important thing . . . the staff and security did a great job in getting everybody out.

“The shop is totally gutted and naturally we’re disappointed, however, all that we can do now is get back trading.”

He added: “This was a bad fire and a quick fire and the aftermath was quite devastating, but we will re-open and are working hard to get the shop back open as soon as possible.

“This shop has been in the community for more than 40 years in some form and we will have it back trading as soon as we can.”

Alan is also working alongside An Post which, located in the supermarket, has transferred all of its Fortunestown shopping centre customers to the post office at The Square until further notice.

It was reported last week that the fire could have been caused by the ignition of fuel lighters, which were on top of a desk which had a heater underneath it – the heat from which, it was alleged, could have caused the lighters to combust.

However, Alan told The Echo that this is unconfirmed, with investigations into the cause of the blaze still ongoing.

Dublin Fire Brigade units from Tallaght, Nutgrove, Dolphins Barn and Tara Street were dispatched to the scene last Thursday at 11am, and while the damage to the premises was significant, crews managed to prevent the fire from getting through the roof.

While the blaze forced the other units in the shopping centre to close for a number of hours last Thursday, they are now all open and trading as normal.

Alan told The Echo that any customer of SuperValu in Fortunestown can use their SuperValu real reward vouchers in Jordan’s Centra’s in Castle Tymon, Killinarden and Springfield – where they can be redeemed.