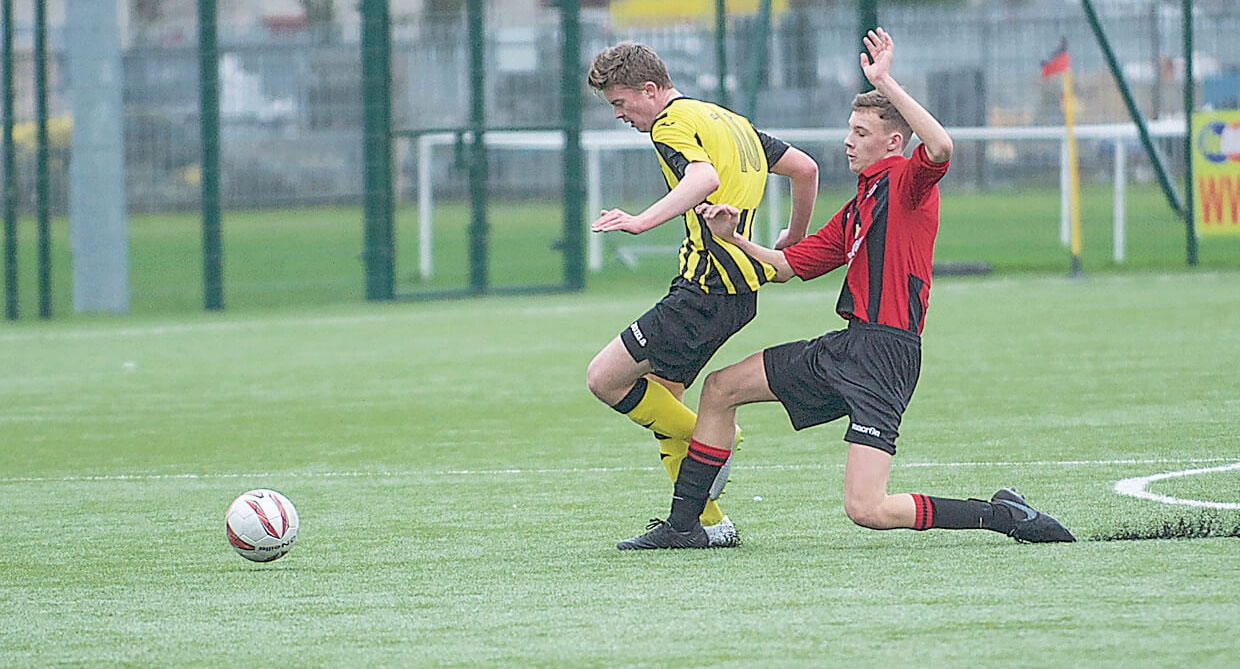 A HAT-TRICK from second-half substitute Cian O’Reilly made the difference for Cherry Orchard as they beat Lucan United 5-2 in the Charles and Paddy Lee Under 19 Leinster Senior League.

The introduction of Cian O’Reilly at half-time made a clear difference for the  Ballyfermot side in Elmdale, drawing comparisons from his manager John O’Brien to that of former Manchester United striker, Ole Gunnar Solskjaer.

“Just like Ole Gunnar what?” he said in reference to Solskjaer’s days as a super sub for the Red Devils while speaking to The Echo after the game.

When Lucan came out after the interval a goal to the good, they couldn’t have prepared enough for the Orchard’s onslaught as they emptied the bench to rattle United’s net five times.

Lucan set up in a very dynamic 3-5-2 formation that nullified the Cherries for much of the first-half and with Luke Condon flying up and down the right flank they caused serious problems for the home side’s defence.

The travelling side opened the scoring when David Cunningham broke down the left-wing and glided a ball across the face of the goal with Condon netting after sliding in at the back post to make it 1-0.

Only minutes later, Lucan were denied a penalty after Cunningham was dragged back as he entered into the box by the trailing defender – with the referee giving a freekick on the line instead of a penalty.

They could have doubled their lead at any moment as they continued to press, but Cherry Orchard’s sweeper-keeper Sean O’Connell was on hand to deny Lucan on several occasions.

The Orchard were on the ropes after the interval except the introduction of Cian O’Reilly brought a new-found energy into his side when he kickstarted their scoring from the penalty spot after he was taken down by Lucan goalkeeper Shane Masterson.

Another conversion from the penalty spot by O’Reilly was coupled with an excellent goal from Jason Whelan, who made an angled run through Lucan’s backline and was found by midfielder Joel Sala with a perfectly weighted pass to slot under the goalkeeper and make it 3-1.

It wasn’t over yet for O’Reilly because he rounded out his hat-trick from open-play after being found by winger Alan O’Brien, a St Patrick’s Athletic player who re-joined his boyhood club during the League of Ireland’s winter break.

Lucan threw all but the kitchen sink after conceding their fourth in a row and their high-press paid off when centre-half Gilles Foka went on a mazing run from his own-half down the left-wing before releasing a rocket from his left peg to the near post.

Although, Ireland Under-18 hopeful and Cherry Orchard captain Ryan O’Brien led an inspired performance to spur his side on before Alan O’Brien rounded out the game with his sides fifth goal.