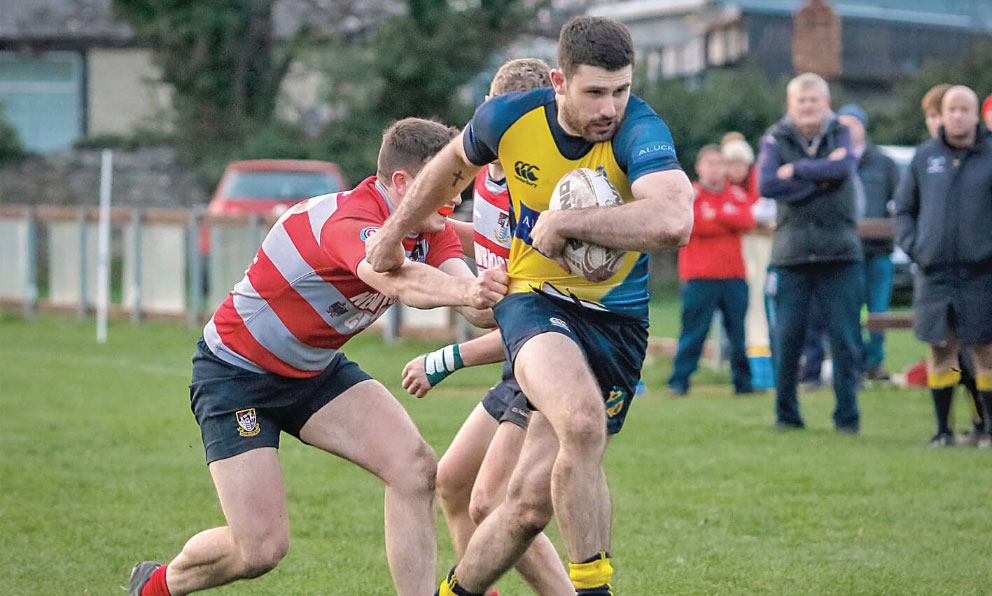 CLONDALKIN rugby club’s first team got the 2019 year off to a great start with a 45-12 victory over Mullingar in Leinster 2A in Gordan Park on Sunday.

Despite a slow start to the match for the hosts, they quickly settled and turned it around with seven tries – four coming in the second half.

Matt Stapleton pulls away from a Mullingar tacklet in Gordon Park on Sunday. Photo: Sharon Flanagan

The win puts Clondalkin sitting nicely on top of the division with Cill Dara in second, a point behind, and Portlaoise third – two points behind.

Clondalkin did not get off to the best possible start and were 7-0 after Mullingar caught them on the top with an early try.

But, Clondalkin soon found their feet and replied with Matt Stapleton capitalising on Chris Jebb’s cross field ball and he touched down in the corner.

Minutes later and Jebb was involved again when the outhalf put Niall Nolan through and he made no mistake by touching down after beating his man.

The home side got off to a great start when back row Simon King avoided a number of tackles to run over and give his side a huge boost.

The midlanders did reply with a try but there was no stopping Clondalkin with Thomas Ankers getting on the scoresheet while Simon King ran in his second off the day.

To round off a great responses, Clondalkin’s Brian Doyle burst through to get the final score in what was a satisfactory performance from the hosts.

“We were very happy with the victory despite the slow start,” Clondalkin Head Coach Philip Byrne.

“Mullingar had nothing to lose and they caught us on the hop. But we controlled the game and it was great to score seven tries.”

Clondalkin have a big game ahead of them this Sunday when they play third place Portlaoise who are two points ahead.

Clondalkin lost to Portlaoise in controversial circumstances in their last match and they will be hoping for a better result this time out.