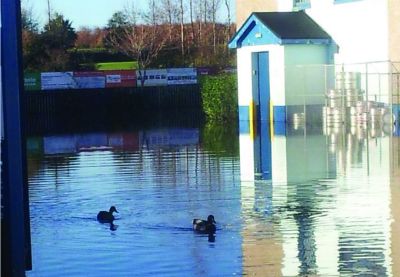 FLOODING concerns were raised at the recent Rathfarnham / Templeogue / Terenure area committee meeting, with ongoing issues surrounding flooding of lakes at the Wellington Lane entrance of Tymon Park causing major disruption to local clubs – an issue that was reported in The Echo last year.

In two motions presented by councillors, the council was requested to outline the causes of the flooding and to rectify the issues which have been impacting on St Jude’s GAA, Faughs GAA and Templeogue United FC.

Fianna Fáil councillor Paul Foley said: “In response to a previous representation regarding the flooding of this lake, I was told it was a blockage and that the problem had been sorted.

There seems to be a more serious underlying issue that needs to be resolved as the lake continues to flood and cause untold disruption to the three clubs.”

In its response, the council said that works have been carried out within the past two months to alleviate flooding, including the relaying of the outfall from St Judes to upper Tymon Park and a second pipe being laid from the lower lake into the Spawell grounds.

It said: “Currently the link between the two lakes is being reviewed to ensure that flow is maintained at all times and how this might be best achieved.

“A blockage of the screen on the existing pipe connecting the lakes caused the carpark flooding in January. We are therefore seeking a solution to prevent a reoccurrence of this problem.

“It is also proposed to examine the wider drainage to these lakes and the discharge to the Dodder.”

Concerns with the overflow of sewage at Mount Carmel Park in Firhouse were also raised by Independent councillor Deirdre O’Donovan, who said: “At the moment the drain is simply surrounded with barriers, but locals as well as park users have had to deal with raw sewage overflowing from this drain during heavy rain, and this runs down as far as the red footbridge nearby, causing very serious health risks.”

In its response, the council said that it has inspected the issue on behalf of Irish Water, with plans to appoint consultations in March 2016 for the design of Ballycullen Oldcourt West Local Network Reinforcement Project which includes a storage tank at Firhouse.

It said: “The repair of the manhole has been delayed due to the soft ground conditions in order to limit damage to the parkland when the required heavy vehicles and equipment are brought in to undertake the repairs. It is hoped to carry out these works in the next week.”