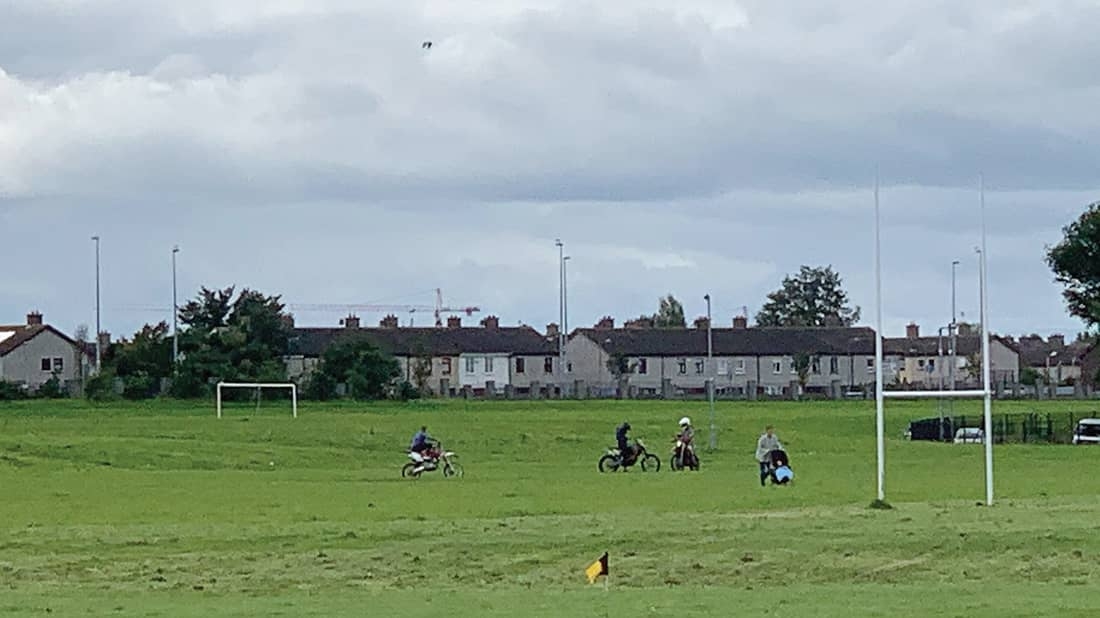 MARKS Celtic FC had to cancel their schoolboy training last week, as their pitches in Butler McGee Park were damaged by people on scrambler bikes.

Ian Cummins, the director of football for Marks Celtic FC, said the club is getting frustrated by the repeated damage to their pitches, and he said several months ago parents formed a circle around where the children were training as someone on a scrambler tried to weave through the schoolchildren.

The children who train on the pitches are aged between four and 18 years old, and they were disappointed by the cancellation of the training sessions.

Ian told The Echo: “Week in, week out, the people on scramblers are always there – even when we’re training.

“It’s horrible, and I’ve approached a few of them during training and they’ve basically told me to do one.

“It’s an absolute nightmare, they literally don’t care. It’s heartbreaking seeing the kids’ faces when we have to cancel training, and parents are fuming about it.”

He added: “It’s costing the council a fortune to repair the pitches every year.”

As reported in The Echo last July, South Dublin County Council carried out boundary improvement works and installed fencing at Bulter McGee Park, and while this has stopped stolen cars from accessing the park, people on scramblers are still able to get in.

“I personally think they should be done for criminal damage,” said Ian.

“And if they live in council houses, they shouldn’t be allowed to live in them anymore because when they damage the pitches, they’re damaging council property.

“I do feel sorry for the council, with the amount of money they’ve had to spend on the park.”

Last year, the council spent over €110,000 on securing the Drumcairn Parade and Drumcairn Avenue perimeter of the park with fencing, while a further €100,000 was earmarked for the completion of a fence at the Cookstown Road side of the park.

A spokeswoman for the council said: “Following a report of scrambler activity in Butler McGee Park over the weekend, South Dublin Council spoke with St Mark’s GAA Club, An Garda Siochana and carried out inspections of the damage caused on the pitches and to the boundary fencing.

“The council will carry out all the necessary reinstatement and repair works.

“Ongoing problems associated with scramblers and quads in some parts of the county is not only causing difficulties for South Dublin County Council but also distress to residents and sporting clubs as their quality of life is being impacted negatively through extreme damage to community open spaces and playing facilities.”

She added that the council carries out works to restrict access for scrambler bikes in parks in the county, and that a high-level task force has been assembled to attempt to resolve the issue.

“The council has invested €500,000 in 2020 for a programme of works to install perimeter fencing and reinforce boundary treatments in a number of parks, and it typically costs between €15,000 and €20,000 to repair damaged pitches”, according to the spokeswoman.