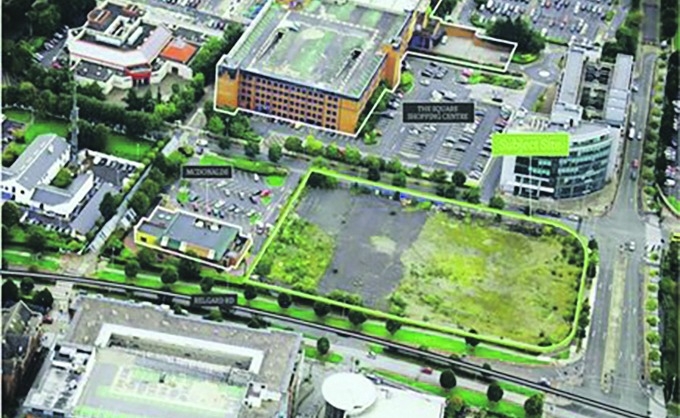 Former Woodies site beside The Square goes up for sale at €4.5m

THE FORMER Woodies site opposite The Square in Tallaght is back on the market at a post-recession knockdown price of €4.5 million.

The 2.2 acre site has planning permission for a €40m leisure and retail complex. The sale is being handled by Savills. The site was acquired before the property crash for about €20 million by Bernard McNamara.

The site was subsequently sold to Oaktree Capital Management as part of two non-performing real estate loans for a combined face value of €4.76 billion.

Last year the planning permission on the scheme was extended until 2020.

The three top floors of the planned five-storey-over-basement building was to have included 13 cinemas capable of seating no fewer than 3,000 people.

Leisureplex facilities were also to have been installed. One of the cinemas was to have seated 500 people, making it one of the largest in the country.

The two-storey cinema with a “blockbuster” screen was intended to cater mainly for major film releases. The promoters even agreed to pre-let the cinemas to UCI/Leisureplex before the entire scheme ran into financial difficulties.

McNamara’s company, Laytar, originally acquired the former Woodies site in Tallaght from a group of investors assembled by businessman Derek Quinlan. They had initially planned to develop a shopping facility and 350 apartments on the site.

Colette Mulroy from Savills described the site as “easily the best development opportunity in the Tallaght area”.