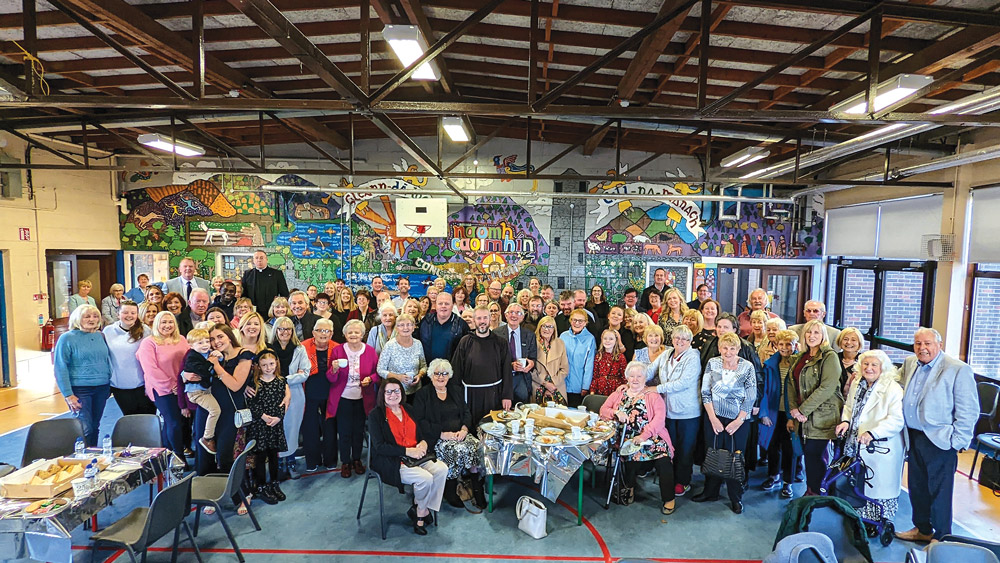 A KILNAMANAGH man celebrated 25 years since his ordination into the priesthood with a celebratory Mass in St Kevin’s Church last Saturday, October 1, reports Aideen O’Flaherty.

Fr Bryan Shortall, 53, was ordained in St Kevin’s on June 8, 1997, aged 28 and went on to join the Capuchin order . He has since served in their churches around the country.

While Fr Shortall’s originally planned celebration last June had to be cancelled because of Covid, there was no shortage of excitement at the well-attended Mass last weekend.

After the Mass ended, attendees then went into the hall in St Kevin’s Boys’ National School where a reception was held.

“I wanted to go back to where it all began,” he said. “I wanted to see all my old friends, neighbours and girlfriends from the Kilnamanagh crew.

“It was very surreal. I was quite overwhelmed. But that’s why I wanted to go back to Kilnamanagh – I wanted to get together with them and mark the occasion.

“It was wonderful, and I felt amazing and I’m still reeling over it in a really positive way.”

Fr Shortall said he decided he wanted to become a priest when he was a schoolboy in Synge Street CBS, and his class was visited by a priest from the Capuchin order.

“I was in a class in Synge Street and a Capuchin priest visited and told us about the order. He had brown robes and sandals on, and I was blown away.

“There was nothing strange or abnormal in how I decided to become a priest, it just felt very homegrown and normal for me.”

Reflecting on how he remembers feeling when he was ordained 25 years ago and starting his journey as a priest, Fr Shortall said: “It was enormously joyful.

“It was a culmination and a realisation of a hope and a dream, for all sorts of reasons. It was something I really wanted, even though I didn’t fully understand the enormity of being a priest.

“I had an idea that joining the priesthood would be very happy and fulfilling, and it did match my expectations very much, and still does.”

The Mass on Saturday gave Fr Shortall the opportunity to reflect on his vocation while in the company of family and friends, and to celebrate the milestone anniversary.

When asked if there’s any advice he would’ve given to his 28-year-old self when he was being ordained, Fr Shortall said: “Nil desperandum, which is Latin for don’t be afraid.”