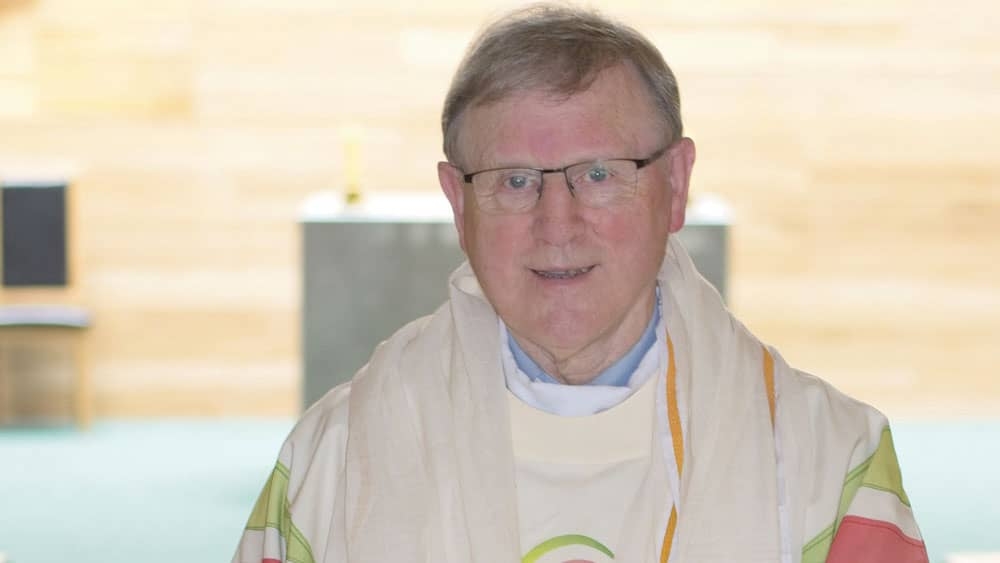 Fr Hurley sees himself ‘more belonging to the community’

THE parishes of St Martin’s and Bohernabreena came together on Sunday to mark 50 years since parish priest Fr Michael Hurley was ordained.

Reflecting on the path that led him to the priesthood, Fr Hurley said that after he finished his Leaving Cert he was undecided about whether to pursue a career in teaching, or become a member of the clergy.

“I had considered a number of things,” he told The Echo, “and after my Leaving Cert I thought, ‘I want to be a priest’.

“There was a priest that I knew and admired, and I saw him as very much giving to the poor and the needy, and I wanted to help people.

“The other thing that was very much in my mind was being a primary school teacher.

“After my Leaving Cert, I had interviews for both colleges – three hours apart – and was accepted by both.

“I decided to try the priesthood, and then I could go to teacher training college if it didn’t work out.”

Fortunately for Fr Hurley, his decision to join the priesthood worked out and he spent several years in the seminary before being ordained.

However, he still remembers the trepidation he felt in the days leading up to his ordination on May 30, 1971, when he was 24-years-old.

“I was back in my hometown in Cork the Easter before I was due to be ordained,” Fr Hurley recalled.

“In those days, you would hitch a lift. There was a friend of mine with me and we were hitching, and I said, ‘I feel very lonely. The next time I go home I’ll be a priest’.

“It was in that moment of loneliness that I realised what I was giving up.”

It was at this point that Fr Hurley fully realised the commitment that he was making by joining the priesthood and how, at that time in Ireland, it would change his place in society.

“The culture of the time was that a priest took on a different set of clothes and became a figure in the community,” he explained.

“Now, from my own experience, and the changed relationship of the Church and parishes in the life of the community, that sense of being the central figure is gone.

“I’d see myself more as belonging to the community, with laypeople and people who are working in the parish.”

Fr Hurley’s first role as a priest was serving in a parish in Finglas and teaching in a local primary school, while also being involved in a youth club in Ballymun.

“It was my first time experiencing three different communities,” said Fr Hurley. “I’d to get my head around belonging to all three equally.”

Fr Hurley was welcomed by all three communities, the members of whom celebrated 50 years since his ordination at Sunday Mass in St Martin de Porres’ Church, with parish secretary Ann O’Connor being the main event organiser, last weekend.

“It’s strange, coming up to a golden anniversary…the passing of life comes up, but getting celebrated brought to the fore, for me, a sense of gratitude for the unique path and opportunities I’ve had,” said Fr Hurley.

“Life goes on. I’m still the same person I was a few days ago, and I’m still happy to serve people and God in whatever way is best.”