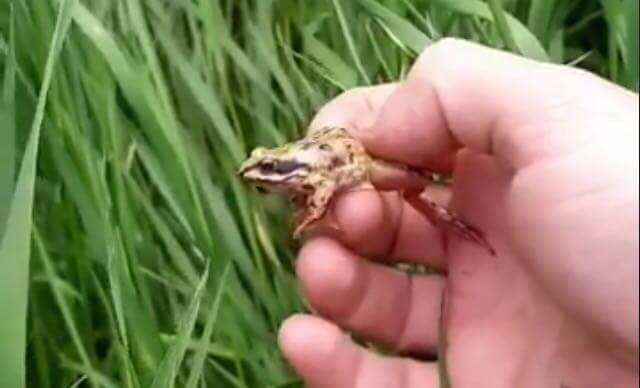 AMPHIBIANS are reaching new areas around the county because of the re-wilding process of grasslands in parks and the surrounding rivers.

Back in February, local conservationist Collie Ennis told The Echo that a majority of ponds, wetlands and areas once used by amphibians as breeding sites have disappeared because of urban expansion.

A frog that Collie Ennis found in Dodder Valley Park during the week.

In a video he made this week while out collecting brambles in Dodder Valley park in Tallaght, Collie said that to his surprise he found that frogs had returned to the area for the first time in years.

“Four years ago, I was out in this area surveying and [the frogs] were barely reaching down as far as the Old Mill Pub there,” said Collie, the Science Office for the Herpetological Society of Ireland.

“Now they are making it right down past the weir and down as far as Templeogue and Terenure.”

As part of the All-Ireland Pollinator Plan, South Dublin County Council has been reducing its grass mowing regimes to allow for greater biodiversity.

In a statement to The Echo, a spokesperson from the council said: “South Dublin County Council is committed to ensuring bio-diversity by contributing to the protection of pollinating insects.

“Since the launch of the All-Ireland Pollinator Plan, two locations for the placement of bee hives have been successful.

“The Heritage Officer has also directed an additional focus on identifying and managing pollinator-specific meadows in Council’s parks and all Council Parks and Open Spaces are currently being reviewed including Dodder Valley Park.

“This involves the identification of grassland locations which are suitable for reduced mowing regimes to allow for longer periods of flowering for wildflowers and grasses, with seasonal cutting of the meadows at appropriate times.”

With it also being Biodiversity Week, Collie explained how important it is for future generations to see local amphibians.

“I think this shows that you can make a difference, whether you live in a 10-acre farm up the mountains or a council house in Tallaght”, Collie said.

“Throw some rotten wood out your back and build a pond and it’ll make a difference – you’ll get a great bit of pleasure seeing all the newts, frogs, badgers and frogs and all.

“It’s important that our kids and their kids get to see these local animals.”