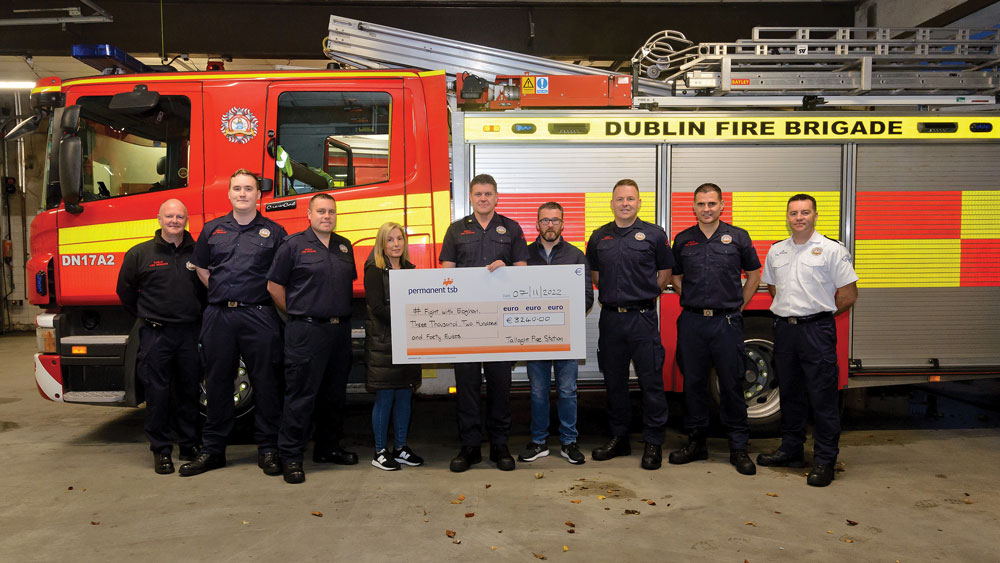 Fundraisers pull out all the stops in bid to help Eoghan

THE family of Eoghan Gorman, who suffered a life[1]changing spinal injury in an accident last year, have expressed their gratitude for fundraisers that were held for him in recent weeks.

Thousands of euros have been raised for the 24-year-old, who is from Greenpark in Clondalkin, as his family hope to get him a specially adapted house for his needs.

Eoghan is currently an in-patient in the National Rehabilitation Hospital in Dun Laoghaire, but he spends most of his weekends out and about with his family and his girlfriend, Saoirse O’Neill.

In October last year, Eoghan was injured in a mountain biking accident in the Dublin Mountains after he fell off his bike coming down a trail.

Eoghan, a past pupil of Holy Family Community School in Rathcoole, fractured his C3 vertebrae on his spine – which is one of the most severe spinalcord injuries a person can sustain.

The young man is now paralysed from the neck down, and a few months after his accident his family and friends set up the Fight with Eoghan campaign to fundraise for him to get an adapted house. 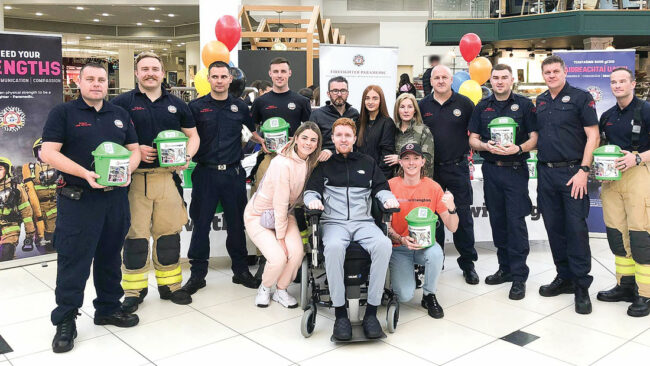 In the last two weeks, over €9,000 has been raised for the campaign as a result of well-received fundraisers by members of the community.

Last week, Clondalkin man and ultra-marathon runner Mark Conlon raised over €6,000 for the campaign after undertaking a gruelling two-and-a-half marathon distance for the campaign.

Last Thursday, November 3, Mark presented Eoghan with his medal from the Dublin City Marathon to mark the achievement, which was particularly resonant as Eoghan was heavily involved in sports before his accident and had represented Ireland in numerous Taekwondo competitions.

Last Saturday, November 5, a crew from Tallaght Fire Station held a bucket collection in the centre mall of The Square Shopping Centre to raise funds for Fight with Eoghan.

The crew, led by Tallaght firefighter and event organiser Derek Riordan, raised €3,240 for the campaign. Derek added that he wanted to thank Dunnes Stores, McDonald’s, The Party Shop, and Ken Purcell from MPL Print for their support, and Batman and Spiderman for appearing on the day.

Commenting on Eoghan’s reaction to the fundraising, Eoghan’s dad Dean told The Echo: “He’s very good, he’s delighted with everyone doing their bit to help him.”

Eoghan’s mam, Tanya, added: “He’s overwhelmed. He was in The Square with us on Saturday, but he did get overwhelmed, so we went back to the van.

“I got him back to the van and Eoghan said, ‘Oh my god, people are raising so much money for me’.

“My words to him were, ‘I hope you appreciate it’, and he said, ‘That’s an understatement’. It’s unbelievable.

“We’re so grateful to everyone who has helped and donated.”

The money raised will be used to either adapt Eoghan’s grandmother’s house in Rathcoole for his needs, or to purchase another house that can be more cost-effectively adapted.

“We want to get him out of the rehab and get him a house, either with all of us or on his own,” said Dean.

“We just need to get somewhere.” Despite the adversity he has faced, Eoghan has still maintained an upbeat attitude to all that’s happened and is looking forward to the future.

Tanya said: “He’s very positive, I don’t know how he does it.

“When the anniversary of his accident came up, I asked him how he felt about it and he said, ‘You could be coming to a grave, but you’re not.’ 7

“I think it helps that he did a lot in his 23 years before the accident.

“He travelled around the world, he drove a car, he’d moved in with his girlfriend Saoirse. He never sat around playing the Xbox.

“We always say to him that his life is not over, he’s just living a different life.”