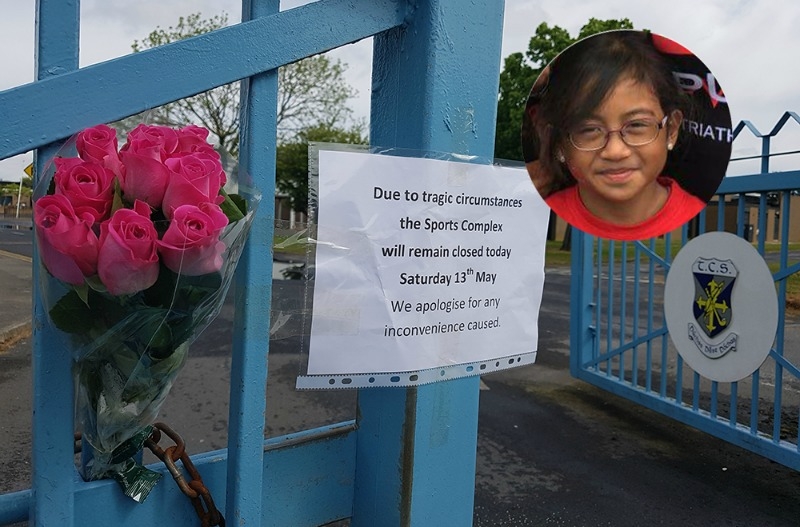 Funeral: ‘The loss of Michaela affected everybody’

A LARGE crowd gathered at the Nativity of the Blessed Virgin church in Saggart on Wednesday to remember and celebrate the life of nine-year-old Michaela Gonda – who sadly passed away from a suspected heart attack in the Tallaght Community School Sports Complex last Friday.

Little Michaela Gonda tragically died after becoming ill during a swim session in the Balrothery-based complex shortly after 7pm on Friday, April 12.

Her father Mike and complex staff attempted to revive the St Mary’s NS student while gardai and three units of Dublin Fire Brigade, including an ambulance and an advanced paramedic van, arrived on scene.

The young girl was transferred by emergency crews to Our Lady’s Children’s Hospital in Crumlin, where she was sadly pronounced dead a short time later.

It is understood that the nine-year-old had underlying health issues and that she may have passed away from a suspected heart attack.

Since last Friday, the community has been united in grief over the sudden loss of the young girl in the sports complex, with Balrothery parish priest Father Ben co-celebrant at Michaela’s funeral – which saw pupils from St Mary’s and the members of a triathlon club stage a guard of honour.

An honour guard from the National Ambulance Service also escorted the coffin, as Michaela’s mam is an A&E nurse in St James’s, while a lone piper from Dublin Fire Brigade played a hymn.

Speaking with The Echo, Father Ben Moran said: “There has been a great sense of loss in the parish of Balrothery since people heard that a young girl had passed away in the complex last Friday night.

“There has been lots of people praying for the parents since and leaving flowers at the complex, which was closed on Saturday and Sunday as a mark of respect.

“I felt it was right as the parish priest to go to Saggart and be part of the Mass planned and I spoke with Michaela’s parents Mike and Yvonne and told them that everybody in the parish of Balrothery and the wider community were praying for them.

“The loss of Michaela affected everybody, the community, the school [TCS] and staff in the sports complex.”

He added: “The funeral was very emotional, but very dignified, and Michaela was remembered with lots of love.”

The Mass was attended by a large crowd, which included a number of families from the Filipino community, the Principal and Board members of Tallaght Community School, which oversees the complex, pupils from St Mary’s NS, colleagues and friends of the family and a number of people from the Balrothery parish.