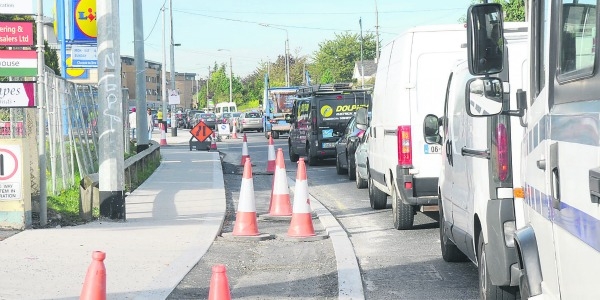 Fury from local residents and businesses over cycle corridor

ONE road, two cycle lanes, three constructions crews, and four months of road works – a conundrum that has baffled businesses and residents in Tallaght village this week.

South Dublin County Council are overseeing a €2 million 3km cycle corridor between Tallaght village to the M50 motorway – but disruptive works over the last four months on Main Road have frustrated the community.

Businesses and residents who have been keeping a close eye on proceedings, told The Echo three different construction crews have been working on Main Road since the project started in June.

Businesses say parts of the project have been laid down three times, including surfaces, kerbs and tiles outside shops.

Construction crews were installing the “final tarmac surface” this week outside the shops – a matter of confusion for residents who thought that stage of the road works had been previously completed.

According to the contractors programme in early August, roadworks in the village were expected to be finished by the end of August.

SIAC Construction – the firm currently working on the project – did not respond to The Echo at the time of going to print.

One business in the village told The Echo they couldn’t access the premises when they arrived to work on Friday due to works outside the front door.

“We had no idea it was going to happen – the boss was not happy when he got in,” said the employee.

Whilst businesses have received apologies from the local authority, residents and motorists are unsure what to expect from day to day.

Temporary traffic lights have been erected for the last few weeks, causing major distress for those caught in the middle.

Main Road resident Stephen Doyle said: “I can’t get out of our place as I’m in between the temporary lights and it’s a game of chicken to see if you’ve guessed which side is green.”

Another resident Lisa Dunne labelled the works “a disgrace – the village is in bits”, whilst many such as Sonya Smith blasted it as a “shameful waste of money.”

A spokesperson for South Dublin County Council said: “Works at this location are scheduled to be finished by next Tuesday.”

Construction firm SIAC issued a letter to businesses on September 25 confirming the installation of the “final tarmac surface in the village from September 28 to October 1.”

Today (Thursday, October 1) there will be no access to the parking bays outside the businesses and to private driveways from 10am to 4pm for any vehicles.

In the letter, the firm apologise to businesses for any convenience and “endeavour to minimise any disruption caused.”