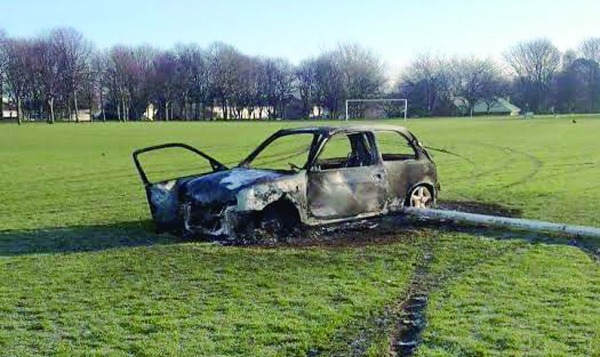 Gangs of youths causing ‘an epidemic of burnt-out cars’

A GANG of up to 40 youths are causing havoc in areas of Dublin South Central, according to local representatives, who fear a return to epidemic levels of stolen and burnt-out cars.

Stolen and burnt-out cars have been found in recent weeks at Cherry Orchard, Inchicore, Drimnagh and Crumlin.

Dublin City Council chiefs have admitted the situation has caught them by surprise, with one senior member saying he hadn’t seen activity on this scale for up to “15 years.”

An emergency motion at the South Central ACM last week, called for immediate action in the aftermath of recent attacks, and urged the council manager to request additional garda resources from Minister of Justice Frances Fitzgerald.

He said: “Gardaí were called but didn’t arrive. We need to ensure additional policing so that the community do not suffer from gangland activities.”

The incident was “sinister” according to People Before Profit Councillor Pat Dunne, who says people need to “see gardaí on the street.”

McHugh’s party colleague Greg Kelly, believes the same “gang of youths” are involved in the activity across the constituency.

“It seems they are being shown how to rob older models – cars are being found burnt out in the canal,” said Cllr Kelly.

In Cherry Orchard, Sinn Féin councillor Daithí Doolan has called for a comprehensive traffic plan, to deal with an “epidemic of burnt-out cars”, particularly in the Croftwood area.

Cllr Doolan said: “It affects the community, it presents a risk, and it’s an added expense for the council who clear it up. If we delay with this [traffic plan], we could be dealing with fatalities.

“I thought we buried this activity in the past, but robbed cars are speeding, up on greens, and breaking walls. The traffic plan requires State funding, and we need to speed up the process.”

A recent Cherry Orchard Restorative meeting at the Familibase regarding quad bikes, was attended by 13 youths, along with gardaí and city council members.

“It was very positive, youths need encouragement,” according to Doolan.

The council has installed metal bollards at Brickfield Park to prevent cars accessing the park, and are working with stakeholders to “deal with the issue.”

Dublin South Central area manager Bruce Philips said: “The event in recent weeks has taken DCC by surprise. It is something that hasn’t been experienced in as long as 15 years.

“We have reacted positively, strengthened gates, cut down vehicular entries, and we will continue to deal with the issue in all the various forums we can.”