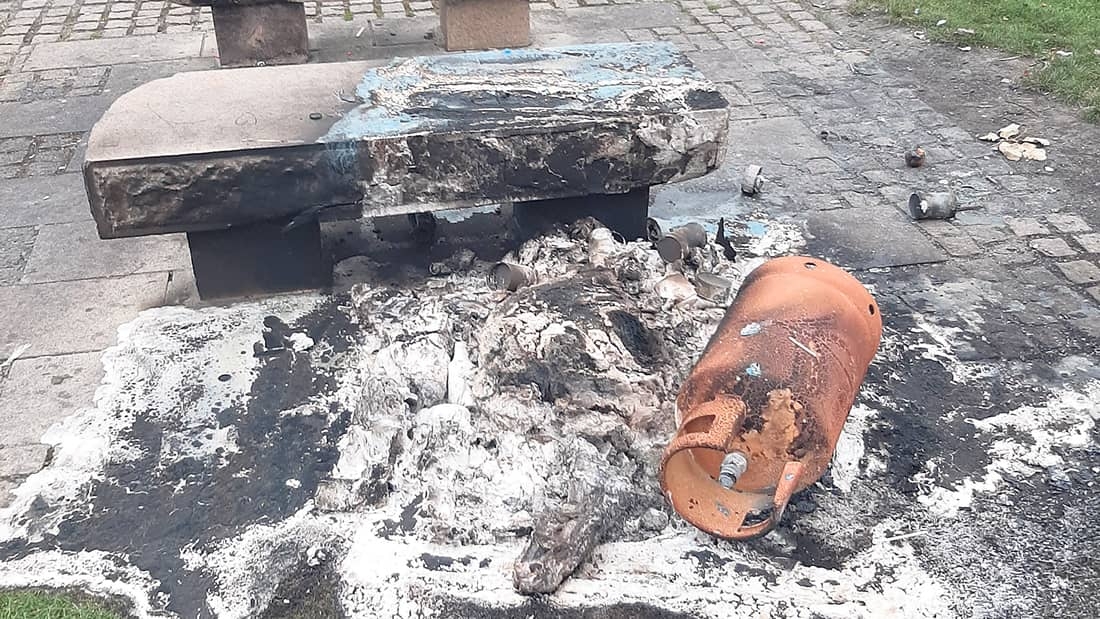 GARDAI are investigating a stabbing in California Hills during which a male received a serious injury on Saturday.

The incident followed a hectic few days in Ballyfermot. Prior to the stabbing, gardai patrolling California Hills seized a significant amount of cash after disturbing a gang of youths “acting suspiciously.”

The money is believed to be the product of drug dealing.

Meanwhile, a young child was hospitalised after being hit by a scrambler bike in Cherry Orchard on September 17.

A woman in her 20s was seated with a male infant on a stationary quad bike when a scrambler struck them. The infant is understood to be in a stable condition.

Additionally, vandals set fire to a park bench at Markievicz Park, in lower Ballyfermot, with pictures of the aftermath showing a gas cylinder at the scene.

Dublin City Council say the bench has been removed and the “damage repaired as part of the day to day maintenance of the park.”

Money found by Gardai in park

The Echo featured images and a video of a scrambler in California Hills narrowly missing a mother walking her child a few weeks ago.

The park has struggled with ongoing issues in recent years including quad bikes, joyriding, drug dealing and neglected horses.

A Rossmore resident believes there needs to be an “investigation into the lack of response from authorities concerning “antisocial black spots” in the park.

The incidents have added to concerns in the area about anti-social behaviour in the lead up to Halloween, with Covid-19 restrictions adding to the sense of unease.

A Garda spokesperson said: “The stabbing occurred on September 19. The injured party received a serious wound to his back. Investigation is ongoing.”

Gardai say the money seizure was part of Operation Tombola, a Halloween operation.

“Gardai from Ballyfermot Garda Station were carrying out a dedicated patrol tackling anti-social behaviour and combatting the use of fireworks in an area known locally as California Hill when they disturbed a gang of youths acting suspiciously.

A large sum of money was discovered and seized in the vicinity of where the youths were congregated. Investigation is ongoing.”