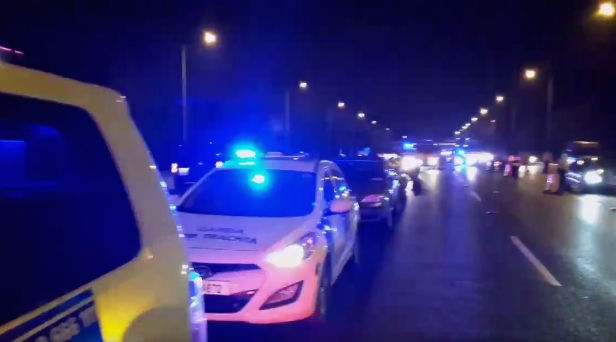 In what is something of an unprecedented move Gardai tonight staged a major drink-driving checkpoint on the capital’s busiest road, the M50.

Reports of long delays around Junction 4 (Ballymun) northbound were reported from about 10:30pm tonight, with the reason behind the delays unknown for some time.

The AA reported that traffic was slow in the area, but confirmation of the reason only came through at 11pm when Gardai shared images of the checkpoint, with the message, “DMR Regional & Divisional Traffic Units with Armed Support Unit during a MAT (Mandatory Alcohol Testing) checkpoint on the M50 tonight”.

A later message from the Gardai included a short video of the checkpoint in operation, with the message, “Never ever drink and drive”.

Last Saturday Minister for Transport Shane Ross said his preference was to cut the drink-driving limit to practically zero in an attempt to quell dangerous behaviour on Irish roads.