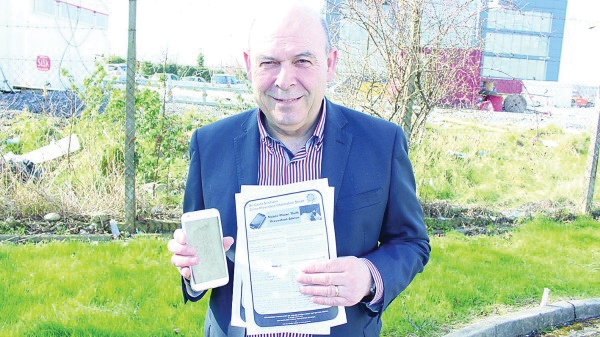 A NEW campaign targeting the growing business of mobile phone theft is calling on members of the public to keep a note of their phone’s unique serial number.

In Tallaght Garda Station alone, hundreds of mobile phones are reported stolen or lost each year, as gangs actively target people in public parks, shopping centres, the Luas or at bus stops – with the intention of robbing phones for sale.

A new nationwide campaign, which is being pushed on the ground by local Gardaí, is encouraging people to register their phone with service providers alongside taking a note of their phone’s International Mobile Equipment Identity (IMEI) number – which, unique to each phone, stays on the device even if the SIM card is changed.

Mark Redmond, Crime Prevention Officer at Tallaght Garda Station, told The Echo: “Reports of stolen and lost phones take up quite a bit of time for officers at Tallaght, plus it puts a lot of stress on people who are aggressively targeted for their phones.

“Mobile phone theft is a national issue, but here in Tallaght with the Luas, a busy bus network, lots of parks and The Square there are plenty of opportunities for gangs looking for phones.

“Most of these phones are being stolen to sell and we want to make it less attractive for these gangs – and people keeping a record of their IMEI number will help.

“If we catch somebody with what we suspect to be a stolen phone, the IMEI number can be used to identify the owner of the phone and if stolen, apprehend the culprit.

“The IMEI can also be used to block the phone with a service provider and even if a new SIM is put in the phone, it won’t change the IMEI.

“A service provider can block a phone once it is registered or if they have the IMEI number – and this will make robbing phones less attractive for thieves.”

He added: “Alongside noting your IMEI number, people should be aware of their surroundings when out walking, standing at a bus stop or sitting on the Luas.

“People are so immersed in their phones that they do not take in their surroundings, with a high percentage of phone theft victims being teenagers.

“We all need to work together on this and not make phone theft easy or attractive for these gangs.”

Each phone’s individual 15-digit IMEI number can be found on the back of each handset under the battery or by pressing *#06# on your phone keypad – with the IMEI appearing on the screen.